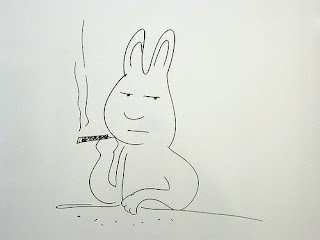 Someone drew this nicotine-addicted rabbit, who looks suspiciously like an editor, on the whiteboard in a conference room at work. Doesn’t it look like a James Thurber cartoon? (But he’s long dead, so we can’t credit him.)

The whiteboards are supposed to be cleaned every Friday, but that rabbit has been there for weeks. I think the cleaning crew is just being lazy, but I'm glad they’ve left him alone. I’ve even taking to maintaining him personally. Every once in a while someone writes notes or a comment on the board around the rabbit, and after a while I go in and erase them, leaving him in skeptical silence once again.
Posted by Steve Reed at 11:17 AM