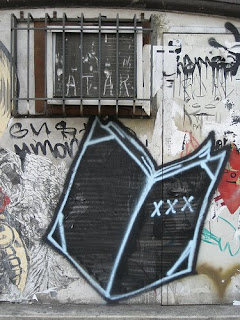 After a two-year hiatus, we’re once again holding our charity used book sale at work. If you have a really incredible memory, you may remember how this works from the last time I wrote about it: We collect used books from employees and books that are lying around our offices, and we sell them to other employees, with the proceeds going to a charitable foundation.

A couple of years ago we made more than $40,000. But that was in our previous office building, where we had a well-oiled system for collecting, sorting, shelving and selling the books over a whole week. This year we’ll make much less because we’re starting from scratch in our new headquarters -- we collected fewer books and we have only three days to sell them.

Still, so far, we’re doing well. I spent lots of time over the last several weeks helping to collect and sort thousands of books, including this past Saturday and Sunday. Yesterday was the first sale day, and it continues today and tomorrow.

The big fringe benefit of working at the book sale is that I get first dibs on browsing the books! Here’s what I’ve bought so far:

-- “The Deep Blue Good-by,” by John D. MacDonald. A master of Florida fiction!

-- “The Underminer: Or, the best friend who casually destroys your life,” by Mike Albo with Virginia Heffernan. (It’s a humor book, though it may not sound like it, and Albo is hilarious.)

-- “Joe Gould’s Secret,” by Joseph Mitchell. (A profile of an eccentric New Yorker.)

-- “Angels and Ages: A Short Book About Darwin, Lincoln, and Modern Life,” by Adam Gopnik.

-- The collected stories of John Cheever.

-- “Jonathan Livingston Seagull,” by Richard Bach. (OK, it’s cheesy, but I have a sentimental affection for this quintessentially ‘70s book -- and it was just 50 cents!)

That should keep me reading for a while! I’ll probably keep very few of these books -- they’ll go back to charity after I finish them. (Martha Cooper and Jonathan L. Seagull are keepers.)

Anyway, I’ll let you know how well the sale fares!

(Photo: The graffiti artist known as Booker or Reader admonishes people to "Read More!" and often paints images of books. Lower East Side, July 2008)
Posted by Steve Reed at 11:42 AM