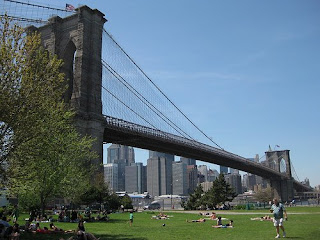 Well, now I have quite the farmer burn from being outside all weekend. Dave and I decided yesterday to go to Brooklyn -- I wanted to show him Dumbo, the neighborhood where the Brooklyn and Manhattan bridges converge. There’s a great waterfront park overlooking lower Manhattan and some nice restaurants. So we zipped out there, had brunch, lounged in the park, and walked over to the historic district in Vinegar Hill.

We’d considered going to the Bronx Zoo, but we never made it that far (not surprising, considering we began the day traveling in the opposite direction). 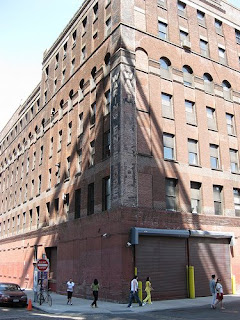 Instead we came back to my apartment, made dinner (baked chicken -- we used the oven again!), and went to see "The Soloist," with Robert Downey Jr. and Jamie Foxx. It was a great movie, especially for a newspaper guy like me. It’s the first movie I remember seeing that addresses the death of newspapers -- showing the layoffs and financial squeezes affecting newsrooms. It also captures the cynical yet idealistic spirit of reporters.

(Top: Brooklyn Bridge, from the park in Dumbo. Bottom: Shadow of the Manhattan Bridge on a nearby building.)
Posted by Steve Reed at 11:34 AM