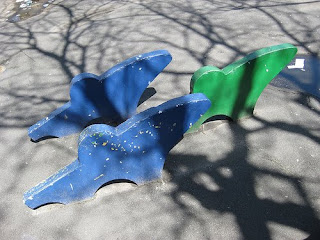 -- Our daffodils, which I photographed earlier, came up this year but didn’t bloom. We didn’t get a single flower. I’m not sure what happened; the bulbs are a few years old, so maybe they’re just tired, and I know the soil in our front planters isn’t good. Our tulips do seem to be blooming, but they were just planted last year.

-- I had an interesting medical experience this week. I was at work one afternoon when I suddenly began having trouble seeing. It was like there were blind spots in my vision. And then I began to get swirling, shimmering haloes around the edges of my sight. It lasted maybe an hour, and it freaked me out! I believe it was the “aura” that sometimes precedes a migraine headache. I did get a headache soon afterwards, though not a particularly bad one. I’ve never had that happen before!

-- I have about 6,000 photos on Flickr these days, mostly of street art. One photo, through the weirdness of the Internet, gets far more traffic than anything else. Soon after I uploaded it last June, someone put this photo (warning: phallic street art!) on a site called StumbleUpon. And somehow, through that site, it gets about 50 hits per day. While most of the rest of my photos have about that many total views apiece, this one has had more than 7,000 views. I’m glad for all the traffic, but I wish they’d chosen a different photo. There are so many works of street art out there (and so many photos I’ve taken) better than that one.

-- Surely by now you've seen the video of Susan Boyle? She delivered a truly moving performance; I even joined her fan page on Facebook. But at the risk of sounding cynical, I must say I wonder whether she (and/or the producers) accentuated her dowdiness a bit to better surprise the judges, and us. What do you think?