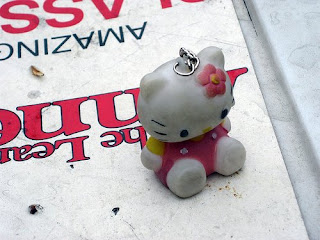 Let it never be said that I live in a boring neighborhood. We’re so cool here in Murray Hill that we now have our very own music video, courtesy of DJ Lubel. And it was largely filmed within about two blocks of my apartment!

Murray Hill has a reputation as the Manhattan neighborhood where all the fledgling bankers and investment types land when they graduate from college and move to New York. (Hence the opening shot of Lehman Brothers, which was not in Murray Hill -- it was across town near Times Square.)

It’s true that I’m surrounded by lots of 20-somethings who like to go out at night and get wasted. The bars on my corner, Tonic (visible in the video) and The Hill (formerly Dip), are routinely packed with these folks.

There are a few of us who don’t fit the video’s demographic: middle-aged, with middle-class Protestant backgrounds and unfortunately static (or declining) income levels. Oh well. C’est la vie. I still love Murray Hill!

As you watch the video, keep these landmarks in mind: The Tasti D*Lite yogurt shop is right around the corner from me, at Third Avenue and 29th Street. Lord John’s Bootery, where I buy my shoes, is just a few doors north of that. Windsor Court, a huge apartment complex, is two blocks farther north. And Joshua Tree, a bar I’m happy to say I have never patronized, is about five blocks north, near 34th Street.

(Photo: Hello Kitty, abandoned on a newspaper box in Murray Hill.)
Posted by Steve Reed at 11:42 AM

I love DJ Lubel! There are some really interesting scenes in his SINGING movie, like the frozen-yogurt-straight-into-the-mouth scene. I think it's cool that he talked all his friends into being in his movie. It made me want to see the Steve R movie of Murray Hill!

Yes, there is Murray Hill. I walk through it almost every day. One of these days you'll have to invite me over.

Hey everyone lives in a neighborhood of 20 somethings who like to go out and get wasted. At least if you like in a city you do, yes?

dj has a very accommodating group of friends!

murray hill is quite the happening place!

I have to agree with reya, wasted 20-somethings, ubiquitous to urban living....even here in little lakewood (which according to wikipedia, has the distinction of being the city with the highest density of people of any city between nyc and chicago!) and yes, we have a madison avenue - in fact like you, I live just a block off madison ave!