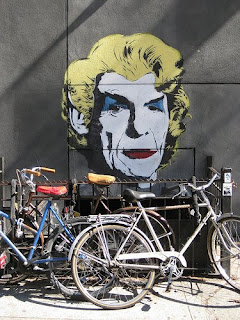 The gym is proving elusive this week -- my nights have been running late so I wind up sleeping in the mornings. I went to a party at my friend Dan’s on Saturday night, and Sunday I had a dinner party and meeting of the newsletter committee for the Zendo.

Then, last night, Dan and I went to see Lily Allen in concert at Roseland Ballroom. She’s a British pop singer who writes tart, saucy songs with lots of attitude. I confess I barely knew who she was before I went -- my friend Christopher gave me one of her CDs a couple of years ago, so I’d heard that, but she’s not someone I listen to regularly. That may change now!

It was a GREAT show. For one thing, it was like a rock concert should be -- general admission, with everyone packed onto the floor sloshing beer around. It was more crowded than the 6 train at rush hour! And Lily’s music was terrific. Here are two videos for songs she played last night, "It's Not Fair" and "LDN."

I also liked her opening band, Natalie Portman’s Shaved Head, which may be the second-best band name ever, after Sandy Duncan’s Eye. They were fun and had a kind of retro synthesizer thing going -- they clearly know their B-52s. And for a band called Natalie Portman’s Shaved Head, they were oddly obsessed with hair, singing about ponytails and facial hair, in addition to Holding Hands in the Shower, which might have been my favorite. Crazy.

Anyway, it was a fun evening. Kind of nice to realize I can still enjoy a good romp at my advanced age of 42.