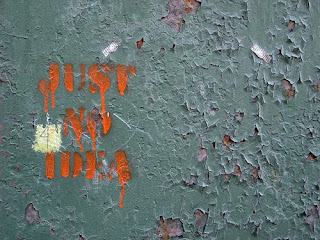 A friend sent me an e-mail asking if I wanted to go walking this weekend. I proposed walking in Williamsburg, Brooklyn, where I hoped to check out a new piece of street art.

Some background: My friend can be acerbic. He freely admits this, just as he admits his tendency toward self-involvement. I’m aware of these factors, but I try to recognize that they’re just his personality.

But on Saturday, things were ill-fated almost from the get-go. First we had a minor disagreement about where to walk -- he suggested Central Park, but I’d just been there last weekend, and then deeper Brooklyn, which I was open to. Ultimately he agreed to Williamsburg. Then he missed his stop on the subway and had to double back to connect with me.

After we finally met, we walked for a while and I tried to make conversation, but I felt a palpable hostility. We tried to decide where to go for lunch, and he rejected a couple of my suggestions while making none of his own. Finally he ducked into a pizza parlor to get himself a slice.

We proceeded to a restaurant I know, and he got the salad he’d said he wanted. But conversation was still difficult. He asked nothing about me or my life. I asked about his, but got either snide quips or complaints about his health, his dog, his apartment, his neighborhood. (He claims to love his dog, but all his comments point to hatred.) Everything I said seemed to annoy him.

He suggested we walk over the Williamsburg Bridge to Manhattan. Soon after ascending the bridge I pointed out a piece of graffiti on a nearby rooftop by an artist I know, and I got a nasty response in a nasty tone. I apologized for pointing it out, turned on my heel and walked across the bridge without looking back. I have no idea whether he crossed or not. I don’t particularly care.

Indeed, that’s what’s most interesting about this incident. I do not feel a whit of sorrow that we parted that way, and in fact, as far as I’m concerned, we’ve parted for good. If anything, I feel liberated.

Normally, I keep in touch with almost everyone in my life. I’ve experienced very few relationships -- in fact, I can think of only one -- that became truly unworkable. But this friendship falls squarely into that category. The break isn’t about yesterday -- it’s about all the effort I’ve put over a period of years into trying to make him happier, to talk to him, to comfort him, to be sympathetic to his many problems, only to be routinely treated meanly and disrespectfully. In retrospect, I’ve been a patsy to endure his negativity and self-pity.

Friendship is a two-way street. I’m moving on!

I can identify with many things you said in this post. My difficulty is in not being able to walk away without looking back.

It will prove interesting to see if he chooses to contact you in the future and how you will feel if that should happen.

I suspect that like me you don't like to hold onto bad feelings and ruminate on them.

You can content yourself by knowing that you behaved exactly as a friend should and unfortunately your efforts were rebuked.

I suppose some things were just not meant to be.

a patsy? I doubt it. But you're right: sometimes, the only thing to do is to walk away. Literally. I've had people do that to me; I've done it to a few people over the years.

Sometimes, when people are locked into negativity and keep on dishing it out, walking away allows the boomerang effect to cause some learning to happen. Sometimes it doesn't, but at least you're no longer on the receiving end of whatever problem the other person insists on projecting onto you.

Hope the rest of the day is excellent, Steve. At any rate, the photo certainly is.

Dennis says you did the right thing ~ Dennis knows you're a joy to be with. Sometimes when people want to hurt you (maybe they think your life is better than theirs) they say mean things or give bad advice or they act like a two year old.

Nothing lasts forever. I'm relieved when it's clear that a certain kind of relationship no longer fits. It's easier then to shift into a different mode.

This definitely was one of those days of absolute clarity.

Life is short. For me, time spent with angry, snarky people is time wasted.

How symbolic that you crossed a bridge!

Turn the page. Life is short.

Reya, can you believe the symbolism of crossing the bridge never occurred to me?? Wow!

That takes guts. I commend you for it!

I agree with your decision Steve. Life is too short and peace of the soul too sweet to suffer fools.

kudos steve, sounds like you'd put in your time and it was a good decision for you

Avoid vexatious people is my motto these days.

I agree with the kind words in the comments from Dennis. But then you might expect words like those from a cat....
Ms Soup

Frankly, I think you sound a little self absorbed.