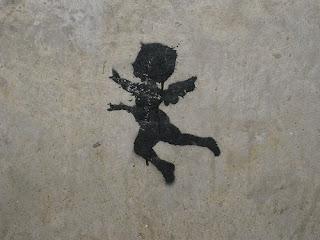 There's a huge open field behind Dave's apartment complex, with rich green grass and scattered fruit trees. It looks like it may have been an old orchard at some point, or maybe it's just a neighborhood park. Neither of us can figure out who owns it, but no one seems to mind when we walk the dogs there.

Last night, as dusk was falling, we took Ernie and Ruby out to the field. There were fireflies everywhere, hovering just over the grass, flashing on and off. It was like someone was holding a huge sparkler over the field, letting the sparks shower down. Even after Dave and Ernie and Ruby turned around to go inside, I crouched down to watch the fireflies skim the surface of the damp grass.

I can understand how the English concocted tales of fairies and other nymph-like creatures in the Victorian era, when such tales were popular. It was easy to believe something mystical was going on in that field. Nature is amazing!