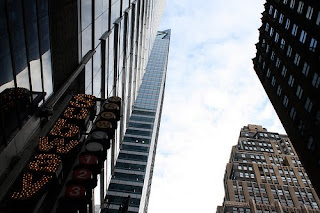 Last night Dave and I went into the city to have dinner at L'Ecole, a restaurant attached to the French Culinary Institute, where Dave went to school. I'd never been there even though it's right in the heart of SoHo, on Broadway and Grand. I've walked past it about a million times. It's kind of scary how oblivious we can be to our surroundings!

Anyway, we had a nice dinner (swordfish for me) and then walked around the FCI building, with its large stainless-steel kitchens and portraits of Jacques Pepin, Bobby Flay and other well known chefs associated with the institute. It was nice to get a first-hand look at a place that was so formative for Dave. We even saw some of his former teachers, who stopped and chatted with us.

Our dinner was in celebratory recognition of the completion of his band's first concert, last Thursday. I attended with our friends Adam and Bill. Overall it was a good show and several people said it was much better than the school had seen in previous seasons, but of course Dave still sees room for improvement, as any good band director would.