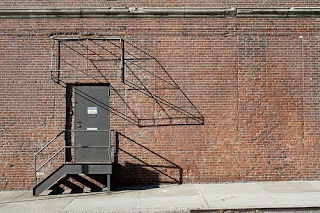 For Christmas, Dave bought me three gift certificates to a local spa for sports massages. He knows I love a good massage!

When I went to redeem the first of these certificates last weekend, though, I discovered that this was not your typical Swedish-style or deep-tissue massage. In fact, I'm guessing the woman who performed it isn't a licensed massage therapist at all. I think she was flying pretty much by the seat of her pants.

The "spa" is something of a glorified nail salon. (In fact, one of our percs for buying three massages was that we got a free pedicure -- about which more in a moment.) When I got there, I was shown into a small changing room and given a white robe. I was then taken to a room with a massage table, where a middle-aged Asian woman asked me to disrobe and lie face-down.

Most massages seem to involve long strokes, using some kind of oil. In this case, though, the woman began by pressing down on my back and limbs -- at one point she even climbed on my back, with her knees on my butt and her hands on my shoulders. (She didn't speak much English, but she seemed aware that this might be perceived as somewhat strange, because she asked, "OK?" I said sure. I was trying to roll with it.) She did all this pressing through a towel.

Eventually she did get around to removing the towel and applying oil or lotion to my back. But the strokes were not what I've felt with typical Swedish or deep-tissue massages -- shorter, maybe, and more focused. She then bent or stretched my limbs into some surprising poses. (At one point, while I was lying on my back, she pulled my knee up to my chin and then diagonally across my body, and hit my hip joint with her fist. I was like, "Lawsuit!") She put hot towels on my body to remove the excess lotion, and I gotta say, when I left I did not feel oily like I sometimes do after conventional massages.

It wasn't a bad massage -- I did feel good afterwards. I'll certainly redeem my other two certificates, and I appreciate Dave's thoughtfulness in giving them to me. It was just different.

The pedicure was actually pretty great. I'd never had a pedicure before, and I was surprised to find myself one of three men in a room of four customers. The pedicurist soaked my feet, trimmed my cuticles, used a pumice stone on my heels and rubbed lotion on my feet. She asked if I wanted "color," and I politely declined -- but afterwards I thought it would have been pretty funny for me to emerge with pink toenails.