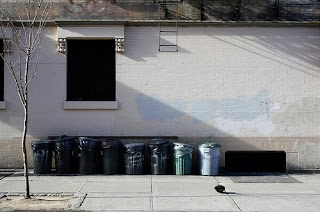 Not much to write about today, so I thought I'd just leave you with these two photos I shot in Chinatown on Monday. It's another of my "with or without" experiments, in which I'm trying to get more people into my photos. At first I was intrigued by the shadows on the wall, and that black plastic bag blew in from the left of the frame, which seemed like a nice touch.

Then a lot of people started walking by. 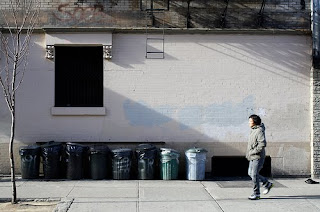 I snapped several shots with passers-by, but I liked this one best because it's the least complicated. I wish I'd been able to get the man's full shadow into the frame, but then he would have been in front of the garbage cans, which would have disrupted their pattern. So maybe this is the best of all possibilities.
Posted by Steve Reed at 1:02 PM