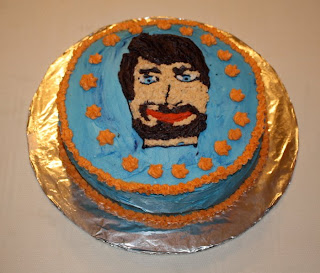 A couple of Dave's students made this cake for his birthday. Isn't it great? I love the Miami Dolphins color scheme and the goofy portrait. (Dave actually looks like that sometimes.) It's chocolate on the inside, with a mysterious middle layer of something -- icing? custard? -- that I must admit I did not eat. You never know with students.

We had a pretty low-key celebration last night, since the big birthday event was Saturday. I gave Dave a book we saw discussed on "The Daily Show with Jon Stewart," called "Pandora's Seed" by Spencer Wells. It looks pretty fascinating -- it's all about the evolution of humans from hunter-gatherers to farmers, and all the unforeseen consequences of that change, from our rising obesity rates to influences on culture and religion.

I walked the dogs again last night amid all the fireflies. Ernie saw a rabbit and bolted after it with far more energy than I ever thought he would be able to muster. Fortunately he was on a leash so the rabbit wasn't in danger -- but my shoulder socket was!
Posted by Steve Reed at 1:10 PM