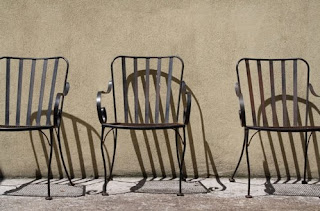 Yesterday Dave and I saw "Red," the Broadway play about Mark Rothko and his struggle to complete a mural for The Four Seasons restaurant in Manhattan. It was a terrific play, and it's been a while since I've seen anything on Broadway so I enjoyed it all the more.

We went to celebrate Dave's birthday, which is actually Tuesday. My idea was to take him to "Red" and then to The Four Seasons itself, so we could see the space where the mural would have hung. I knew Dave was interested in The Four Seasons because he'd mentioned it before -- specifically its French chef, Joel Robuchon.

However, when I did a little research, my plan got derailed. Robuchon actually works at The Four Seasons Hotel, an entirely different venue from The Four Seasons restaurant. In fact, it's not even on the same street. I asked Dave where he'd rather go, Robuchon's "Atelier" (as his restaurant is known) or the restaurant mentioned in "Red," which is located in Mies van der Rohe's mid-century masterpiece, the Seagram Building. He chose Robuchon.

I, however, was determined to maintain the play connection. So I settled on a plan to have a drink at The Four Seasons restaurant before moving on to Robuchon's "Atelier" for dinner.

Wouldn't you know it -- the bar at The Four Seasons was closed for a private party! So we asked the maitre d' if we could just look at the dining room, and he agreed. We peeked in and saw the large, open, wood-paneled space with a shallow fountain in the middle and Rauschenberg paintings on the walls, where Rothko's would have hung if he'd completed his commission. Then we went to Cipriani in the Sherry-Netherland for our drinks.

We moved on to Robuchon's restaurant and had the chef's tasting menu, which included such treats as scallop with chive oil and quail stuffed with foie gras. The menu was interesting, the service was excellent, but we were not entirely wowed.

I guess you could say we experienced eight seasons in our very full day!

(Photo: Chairs at an outdoor cafe in Brooklyn, a few weeks ago.)
Posted by Steve Reed at 1:08 PM