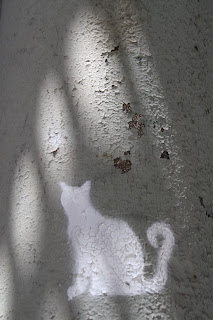 A few months ago, Dave and I bought some lush, colorful hydrangeas at Shop-Rite and put them on our balcony. One was bright pink and the other the standard dusky blue. They looked great for weeks and weeks, but eventually, as all hydrangeas do, they began going to seed. The flowers got dry and faded; the leaves began to curl and brown at the edges.

Dave wanted to throw them out, but I just couldn't do it. They were still alive, with green buds and leaves and thick stems. They looked pretty ragged, but I wanted to give them a chance.

We asked our apartment complex if we could put them in the ground in front of our building. Control freaks that they are, the managers said no. Yesterday we planted them anyway. (Come and get us, managers!) We'll see if they survive. I'll help them out with occasional watering.

Last night Dave and I went to a Drum Corps International show in Trenton. Like my first DCI show, this one impressed me with the precision of the marching and music. I still think it's weird that they throw around fake guns, though.

Somehow I didn't notice last year that DCI groups are all brass, drums and color guard. There are no woodwinds and even no trombones. Dave says this is because the groups grew out of a bugle corps tradition. Seems like they'd want to add more instruments to achieve a greater variety of sound.