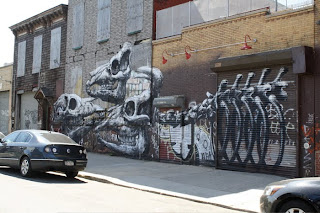 I went out to Brooklyn yesterday primarily to see this HUGE piece of street art by the artist Roa, who's been working around town the past few weeks. Isn't this amazing? And it's not a big paste-up, either. It's hand painted. 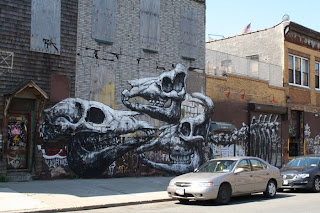 As it turned out, yesterday was a terrific day for walking. The weather was spectacular, with perfect temperatures and a pristine blue sky. I don't think I even broke a sweat, the temperature was so perfect. I had my iPod with me, and thus was provided with an ideal soundtrack for the day -- I could really identify with this post by my blog pal Reya, who appears to have had a similar experience. I was joyfully moved by the combination of bright sunshine, shifting scenery and music.

I took a bus into the city -- a different bus from the one I normally take, which expresses to the Port Authority. This one ran express to downtown Manhattan -- the financial district. I got aboard just because it came first, and I didn't care where in Manhattan I landed. Anyplace was fine!

So I began walking in the financial district and traipsed up through Chinatown (always fertile photography territory) and the East Village, before boarding the subway and heading out to Bushwick. In between I stopped for coffee at The Bean, a coffee house on First Avenue that I've always liked, and later for a cheap burrito at lunchtime. 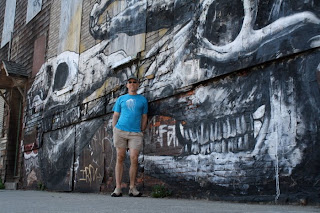