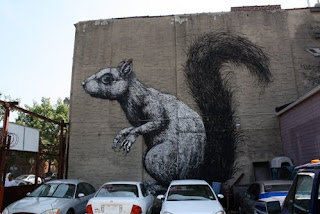 I met up with blog pal Kim yesterday for some wandering in the city. We wound up walking farther than I have ever walked in a single day, I'm convinced. Chelsea, Tribeca, SoHo, East Village and then parts of Brooklyn -- wow!

I had a few street art pieces I wanted to find, notably the rest of Roa's work. I had a cheat sheet of locations provided by a friend, but still -- just getting to many of these places required some leg work. Fortunately Kim is also a walker, in fact maybe even more of one than I am, so we had no trouble with endurance. 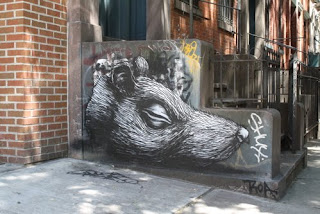 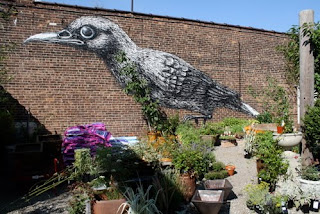 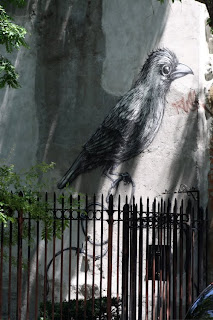 Kim is remarkable for her ability to engage strangers and have conversations. She doesn't think anything of asking someone to pose for the camera or for permission to enter their business for a better photographic angle. I don't normally do those things -- I am very New York that way, declining to "get involved" with people I don't know. But because of Kim, we had some great experiences yesterday just talking to people -- the aging revolutionary at the Yippie Cafe in the East Village; the exotic bartender who lived in Paris in a mysterious uncle's apartment; the heavyset garage mechanic who thought nothing of hiking up his shirt to show us his tattoos.

At one point, we were outside Mars Bar, a neighborhood joint in the East Village that is perpetually covered with graffiti. I'd never been inside, but Kim promptly went in to check the place out. Meanwhile an older woman came up to me on the sidewalk and asked what the place was like. I said I didn't know -- I'd never been there. She said, "Me neither. Let's go in!" So all three of us wound up hanging out in Mars Bar for a while, though the mystery woman only stayed long enough to get a good look. Kim and I stayed for a beer.

We ran into a guy in Chelsea who clued us in to an exhibit of late Monet paintings at a nearby gallery, and for a half hour or so, we strolled among the water lilies and rose arbors, admiring Monet's purple-blue and rusty red color palettes. We then checked out the High Line, an elevated park on an old rail line along the west side of Chelsea, with stunning views of the Hudson River.

Later that evening we met up with Gary and had dinner at a mediocre French place in Hell's Kitchen. A couple of cocktails later, we learned to live with the dry sole meuniere and gelatinous-looking coq au vin. In fact, we had a ball!

Today I'm exhausted. I've got a Shirley MacLaine movie to watch and I'm planning to camp out in the recliner and do nothing!
Posted by Steve Reed at 1:28 PM