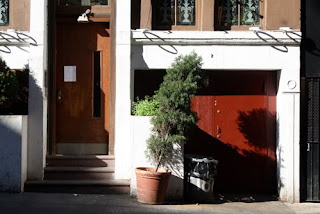 On Thursday night I was sitting on the couch when I felt something crawling on the back of my thigh. I brushed it off and discovered to my horror that it was a tick.

Finding one tick would be bad enough. But this was the fifth tick I've found in our apartment over the past few months: one on a wall, one on Ernie, and three on me!

I suspect the dogs pick these ticks up in the field or woods as we walk. For whatever reason, the ticks usually don't stay on the dogs. They make tracks in my direction -- maybe because I always sit on the couch alongside the dogs, while Dave sits in his chair. (It could be that I pick up the ticks while walking, but I usually look myself over after I come inside.)

I don't think they're deer ticks, the kind that carry Lyme Disease -- at least, they don't look like the deer ticks I see pictured online. The coloring is different. But who knows? Fortunately, I haven't found any evidence that they've bitten me.

Dave hasn't found any ticks yet -- because he works, he spends less time with the dogs than I do, and as I said he doesn't share the couch with them. One of his students found a tick on himself during class not too long ago, though. We both agree we've never lived in a place with so many ticks!

We're going to get some kind of anti-tick treatment for the dogs, and hopefully that will solve the problem.