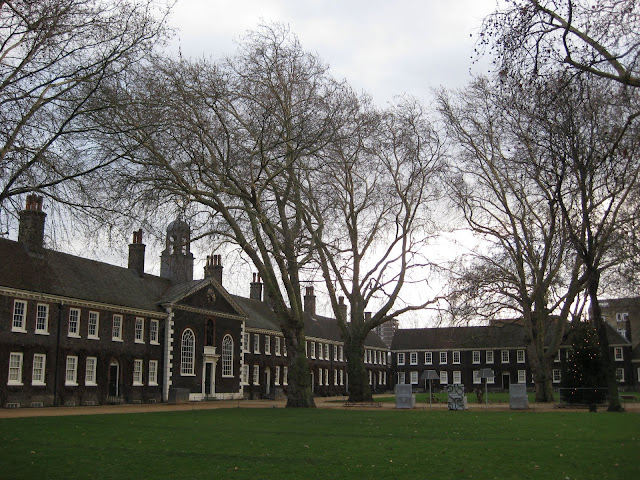 Yesterday Dave and I went to the Geffrye Museum, which houses eleven period rooms from the 17th through 20th centuries. It's meant to show how middle-class Londoners lived during those various eras, with authentic furnishings from the time. It was pretty cool. Given that I've gone through numerous pieces of furniture in my own relatively short life as an independent householder, I'm surprised any furniture could survive for more than 300 years -- especially with its original upholstery, like this "Turkey work" chair!

The museum has a special holiday exhibit, with the rooms decorated in period style, that ends today. I was glad we snuck in just in time to see it, even through Christmas already seems so over. Did you know Christmas trees didn't appear in English homes until the Victorian era, when they were introduced by the Germanic Windsors?

After the museum, which is housed in an old alms-house for the poor (above), Dave and I walked through Shoreditch so I could show him one of London's hottest neighborhoods for street art. I go there fairly frequently for photography but he hadn't seen it yet. We had coffee in a little espresso shop, admired the ever-changing cycle of artwork and wandered down Brick Lane, with all its Bangladeshi restaurants, before catching the Tube back home.

By the way, I did check out that neighborhood Buddhist center I mentioned a few days ago. I went on Friday for their open meditation period. It was interesting -- definitely not the Zen lineage of Buddhism I'm used to, but just another path of practice. I'm sure I'll go back!
Posted by Steve Reed at 8:17 AM