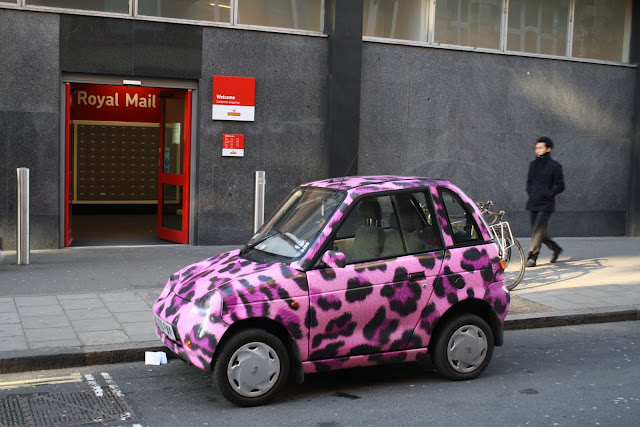 You gotta love this little car, which I spotted during my lunch break yesterday. People in London seem to love their animal-print cars. I've also seen a zebra car and another leopard car.

I'm back in photo class this week. Yesterday we talked photojournalism and went walking through Covent Garden and down by the Thames, shooting shadows and silhouettes. I got some nice shots, which you can see on Flickr (and probably here) over the next few days.

Dave and I went to see "Margin Call" on Sunday, and we really liked it -- which is a good thing, because the tickets cost an astonishing £17 apiece. (That's about $26 -- each.) We decided to try the Westfield cinema in Shepherd's Bush, which is within walking distance of our apartment. It's a very swanky cinema in a very swanky mall, and "Margin Call" was showing in an extra-swanky theater in the cineplex -- a theater, come to think of it, befitting a movie about the One Percent. I'm never going there again!
Posted by Steve Reed at 7:13 AM

Those animal print cars are a riot!

Your right that is way too much for a ticket. :/

I want the little car! So cute! And I'll bet it gets GREAT gas mileage. Although with my driving habits perhaps my more nondescript car is a better option for me :)

Wow that's a LOT for a movie!

If one must have a car in London then that would be it! Anxious to see your photos!!!

Why was the movie so expensive? That does seem fitting, though --

I have no idea why it was so expensive, except it was a super-fancy theater and I imagine they have some serious overhead to clear.

We were able to see Margin Call for a mere single price of $4.99 in the comfort of our home while it was still in the theaters! Go figure! We liked it a lot, too. It makes that whole saga we had only heard about so much more real and terrifying.

I think that's an electric car made by Mahindra, a company from India. I dig the paint.

Hi anonymous. It's my photo. I guess they picked it up because they liked it! I added a credit to that page you linked me to -- thanks.