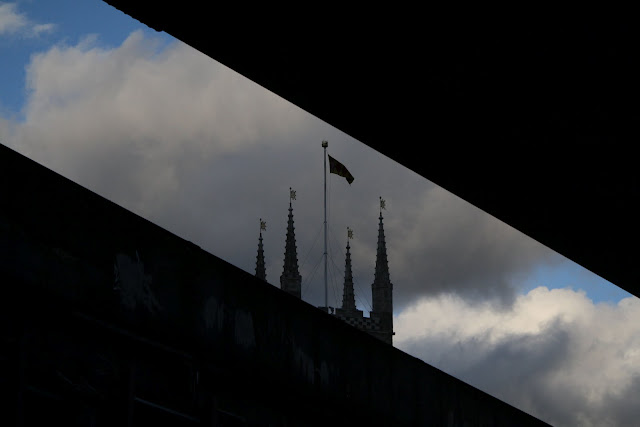 I spent yesterday morning with my photography class, reviewing our photo assignments from earlier in the week. I was pretty happy with the way my Portobello Road photo essay turned out -- for just an hour or two of shooting, I think I came up with some pretty good images. We then went to St. Pancras train station to photograph an attempt by several couples to break a world record for longest marathon hug.

Then I played hooky. I skipped out of class to join Sally and Liz for a wander through Southwark and Bankside near London Bridge. I'd agreed to meet them before I signed up for the class and didn't realize the conflict until a few days ago -- I figured since we'd be taking lots of photos, being with them was just as good as being in class, really. Besides, it's not like I'm getting a grade or even a graduation certificate.

We had a good time at Borough Market, a food-lover's paradise but a vegetarian's nightmare -- I saw wild game hanging from hooks and a deer being butchered. Yikes. Then we walked along the muddy banks of the Thames, picking up little shards of glass, pottery and clay smoking pipes. Beachcombing along the Thames is fascinating -- those shards could be hundreds of years old. (Apparently you need a license for serious beachcombing, the province of people known as "mudlarks." As you can see from this site, truly incredible, museum-quality objects can be recovered from the Thames.)

We went to the Tate Modern to see a photo exhibit and a temporary film installation. Then we went back to Borough Market, where we met Liz's husband Andy and drank a pint while standing outside a surreal red-carpet party for Walkers Crisps. I had no idea who the "celebrities" in attendance were, but then I don't watch "The Only Way is Essex" -- which is essentially England's "Jersey Shore" -- or "Celebrity Big Brother." (I tried to ask a papparazzo -- of which there were legion -- who the celebs were. He said "I don't speak English" and turned a cold shoulder. They really do have bad karma. Fortunately a kind woman nearby, waiting to enter the party herself, filled us in.)

We topped off the day with dinner at Applebee's. No, not that Applebee's. This is a seafood restaurant at Borough Market, where I had terrific skate wing.

Today, back to class for one final day!

(Photo: The spires of Southwark Cathedral, seen between overhead railroad tracks at Borough Market.)
Posted by Steve Reed at 7:47 AM