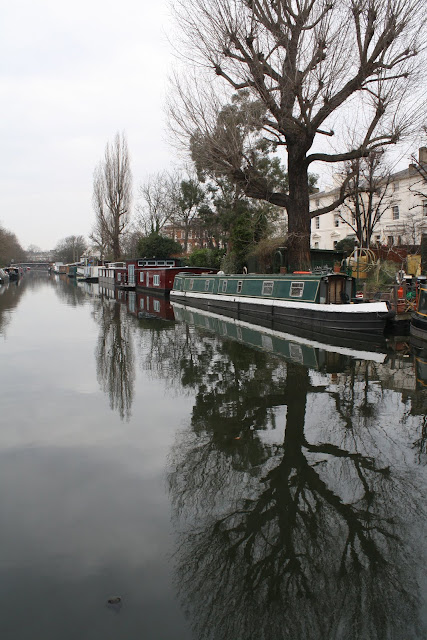 I've written before about the Grand Union Canal, near our neighborhood -- the canalside towpath is one of my favorite running and walking routes. I hadn't explored much of the canal beyond our area, though, and I often wondered how far the path goes. Yesterday, I began following it to the east. 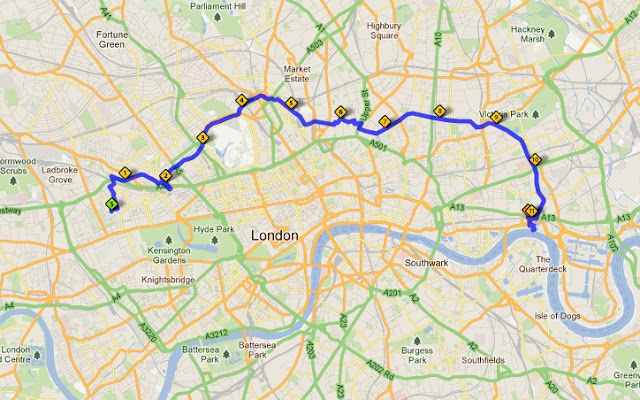 I didn't intend to, but I wound up walking nearly 12 miles, the entire length of the Regent's Canal. The 200-year-old canal flows through the boroughs of Westminster, Camden, Islington, Hackney and Tower Hamlets before coming out at the Thames in Limehouse, near Canary Wharf.

The Grand Union Canal joins the Regent's Canal in a picturesque area east of our neighborhood known as Little Venice, near Maida Vale (top). Little Venice is a boat basin with a park and lots of anchored "narrow boats" along the shore, surrounding an island graced by a weeping willow tree. The canal here branches into two waterways. 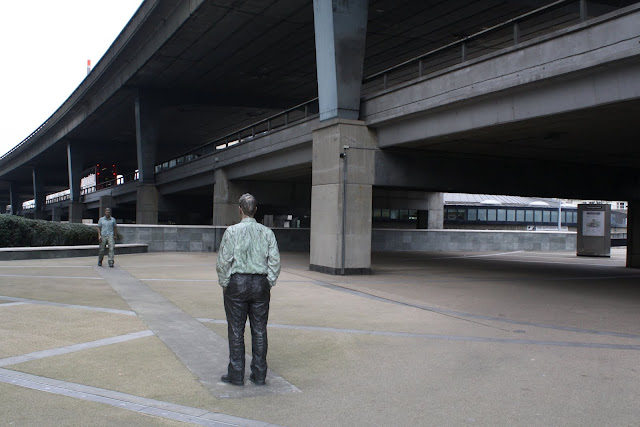 I followed one, but soon wound up at a dead-end basin near Paddington Station -- a very urban area with overhead highway ramps and waterside warehouses and office blocks. I found this sculpture, Sean Henry's "Standing Man." Then I turned around and went back to Little Venice to get back on track. 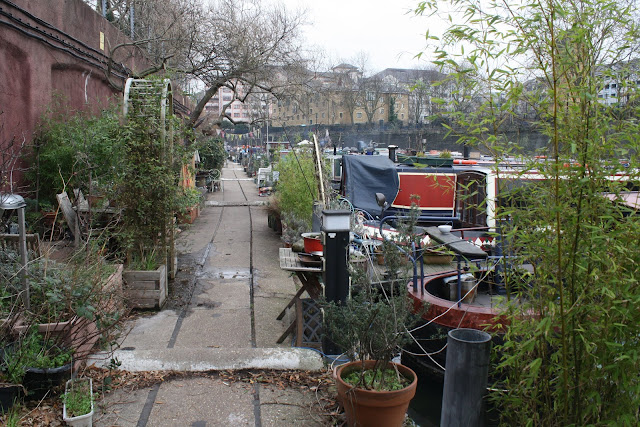 Following the other branch, I walked east toward Marylebone. The canal goes into a tunnel under Edgware Road and the towpath briefly ends, so I had to walk a few blocks along the streets to pick it up again -- and when I did, the towpath was crowded with potted plants, garden decorations and other items from a neighborhood of (apparently permanently) moored boats. 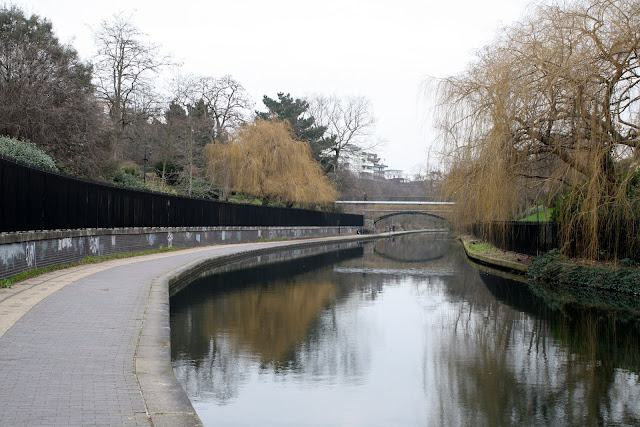 Soon the path opened up again, though, and I found myself walking through a very wealthy area along the north side of Regent's Park. I passed beside the London Zoo and into Camden. 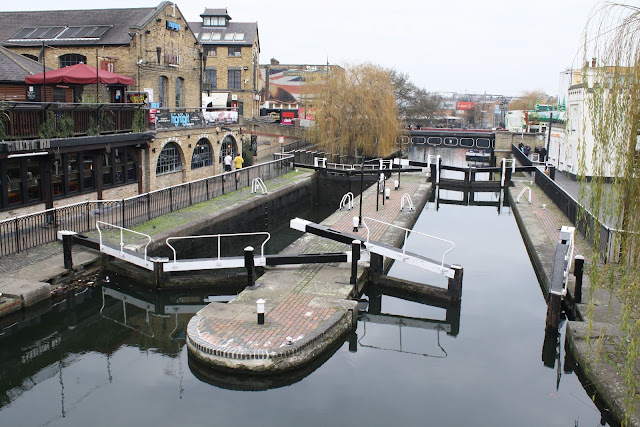 At Camden there are locks that allow boats to navigate changes in the canal's height. These are the first of many locks that I encountered as I walked eastward. I stopped here and had some vegetarian Indian food, a cappuccino and a scone at Camden Market. By this time, I'd been walking a little more than two hours. 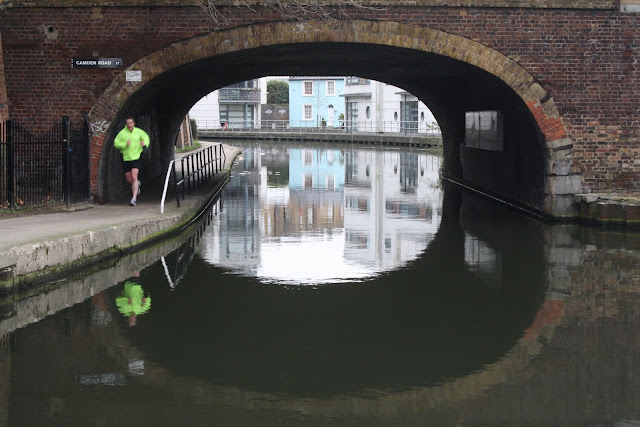 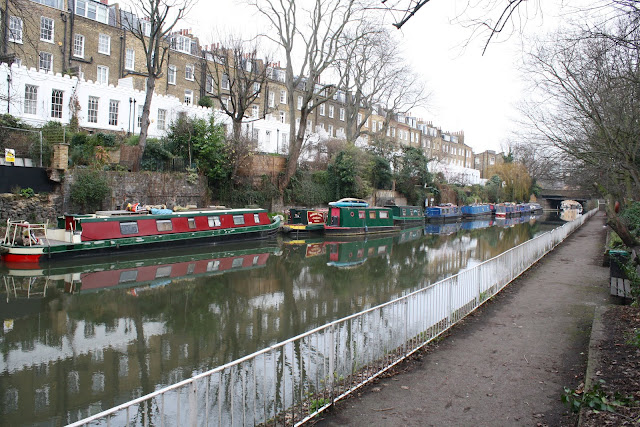 The canal continued through a somewhat industrial-looking area just north of the St. Pancras railroad station, and then into Islington, where it was lined by townhouses. It entered another tunnel, so I came up to street level for several blocks until I could rejoin the waterway again. I started seeing more and more walkers, runners and bicyclists. 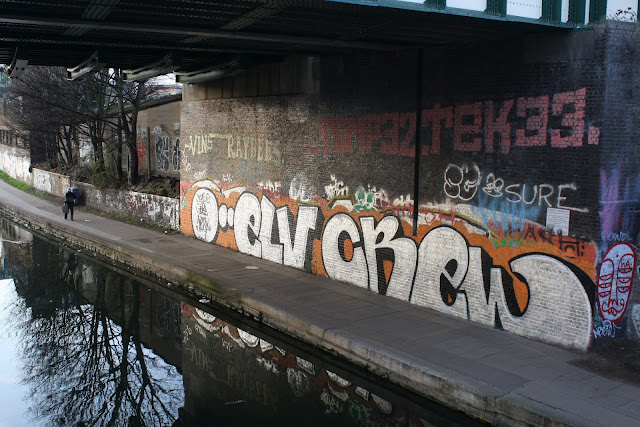 In Hackney, the walls along the canal became canvases for graffiti and street art of all kinds. I got lots of interesting pictures of the artwork.

Finally, in mid-afternoon, I found myself walking through Mile End, with the towers of Canary Wharf gleaming gold ahead of me. 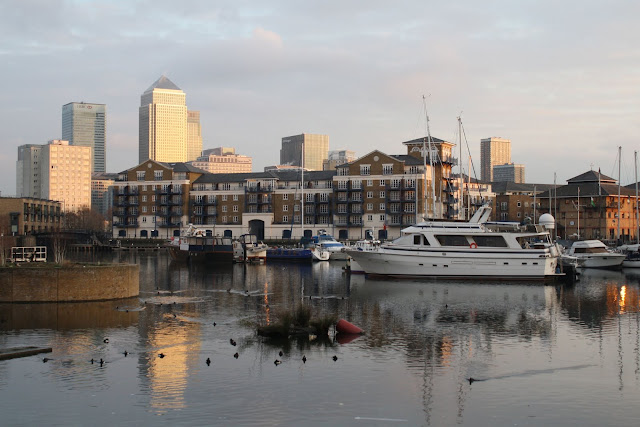 By the time I got to Limehouse Basin, where the canal joins the Thames, the sun was beginning to set. As you can see, the basin contains lots of swanky-looking boats. 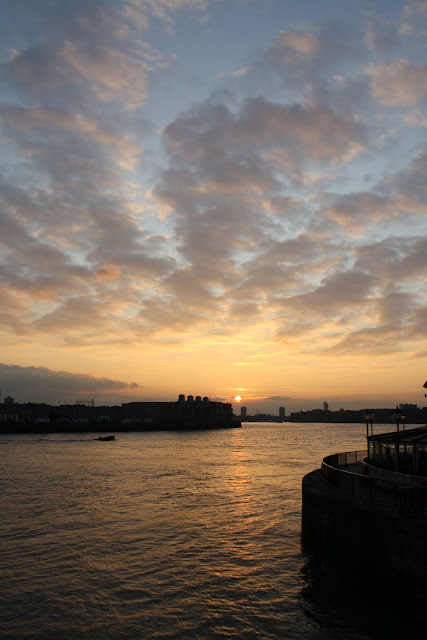 I circled the basin and reached the canal's mouth at the Thames just in time for sunset. It took me from 9:30 a.m. to 4:30 p.m. to walk the entire distance -- though I'm sure it could be done much faster. (I was pausing to take lots of photos along the way.) I was so happy to get on the train at Limehouse and rest my aching dogs as I rode back to Notting Hill!
Posted by Steve Reed at 6:21 AM