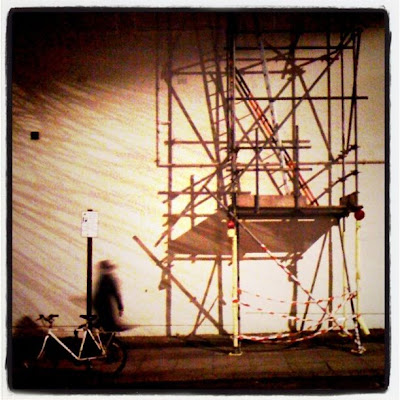 The book I'm reading now, "Mother Tongue" by Bill Bryson, is all about the evolution of the English language. It's an interesting read. Bryson tracks the roots of English, the origins of certain interesting words, the reasons American spelling is different from British spelling, the sources of our grammar and sentence structure, and other subjects.

For example, the term "O.K." I've long had a vague idea that it came from the military, and relatively recently. But Bryson said its earliest usage in print was March 1839, in a Boston newspaper. Apparently some young people at the time thought it funny to use "intentional illiteracies," and O.K. may stand for "Oll Korrect." I had no idea.

He also makes the point that some of our rules of grammar really make no sense. For example, we have rules against split infinitives, and against ending a sentence with a preposition. Apparently these are rather groundless prohibitions that serve no useful function. We prohibit split infinitives because they are prohibited in Latin, and an early grammarian simply thought ending sentences with a preposition sounded bad.

I've never really stopped to think about our rules for usage, grammar and spelling -- I've merely adopted them, as most of us do. I've long been aware that English is a growing, changing language, but who knew it was so arbitrary? 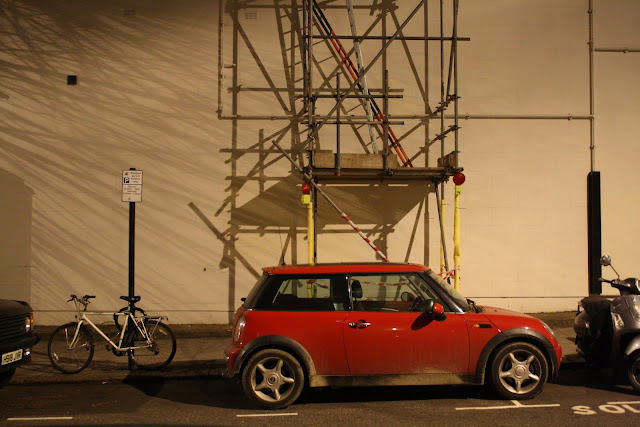 Dave and I went to see "Shame" yesterday. It's a powerful movie, and an interesting examination of the excesses of misplaced desire, but I can't say I loved it. It's almost painfully slow in places -- and this is coming from someone who normally likes slow, cerebral movies.

Otherwise, we had a very quiet weekend. We've spent a lot of money over the past few weeks -- a new rug for the living room, numerous restaurant meals and movies, my photography classes, airplane tickets for Amsterdam and my visit to Florida late next month. It's time to pare back for a while!

(Photos: Top, an Instagram image of some sidewalk scaffolding near our flat. Bottom, the same scene taken with my camera a few minutes later, after the red car had parked.)
Posted by Steve Reed at 7:25 AM