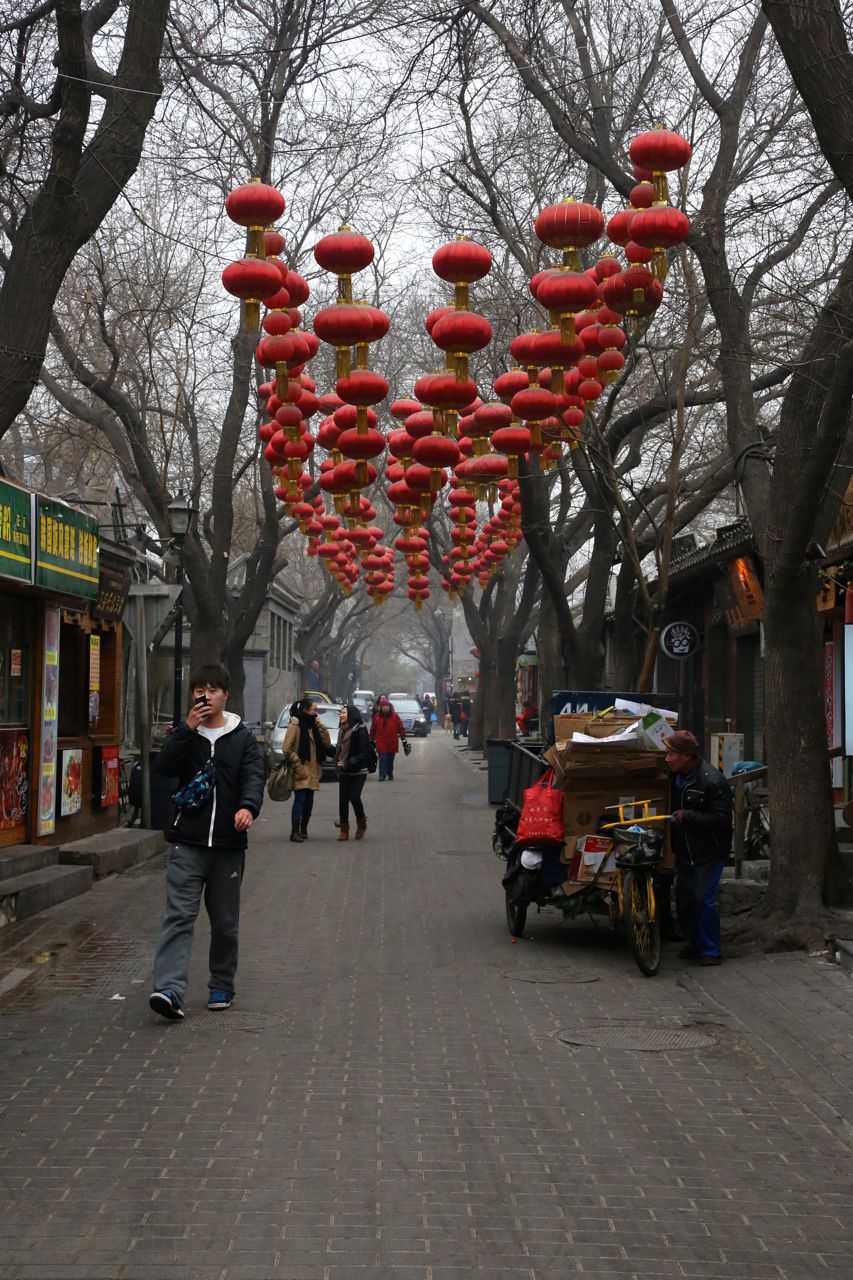 If I learned one thing in Beijing, it's this: Just because you have sun one day, doesn't mean you'll have sun the next.

Beijing's notorious smog returned with a vengeance on Thursday. Dave, pleased with our dining experience the night before, decided to take a cooking class at Black Sesame Kitchen that morning, so I was on my own and free to wander. Despite the air quality, I went out to see what I could find. 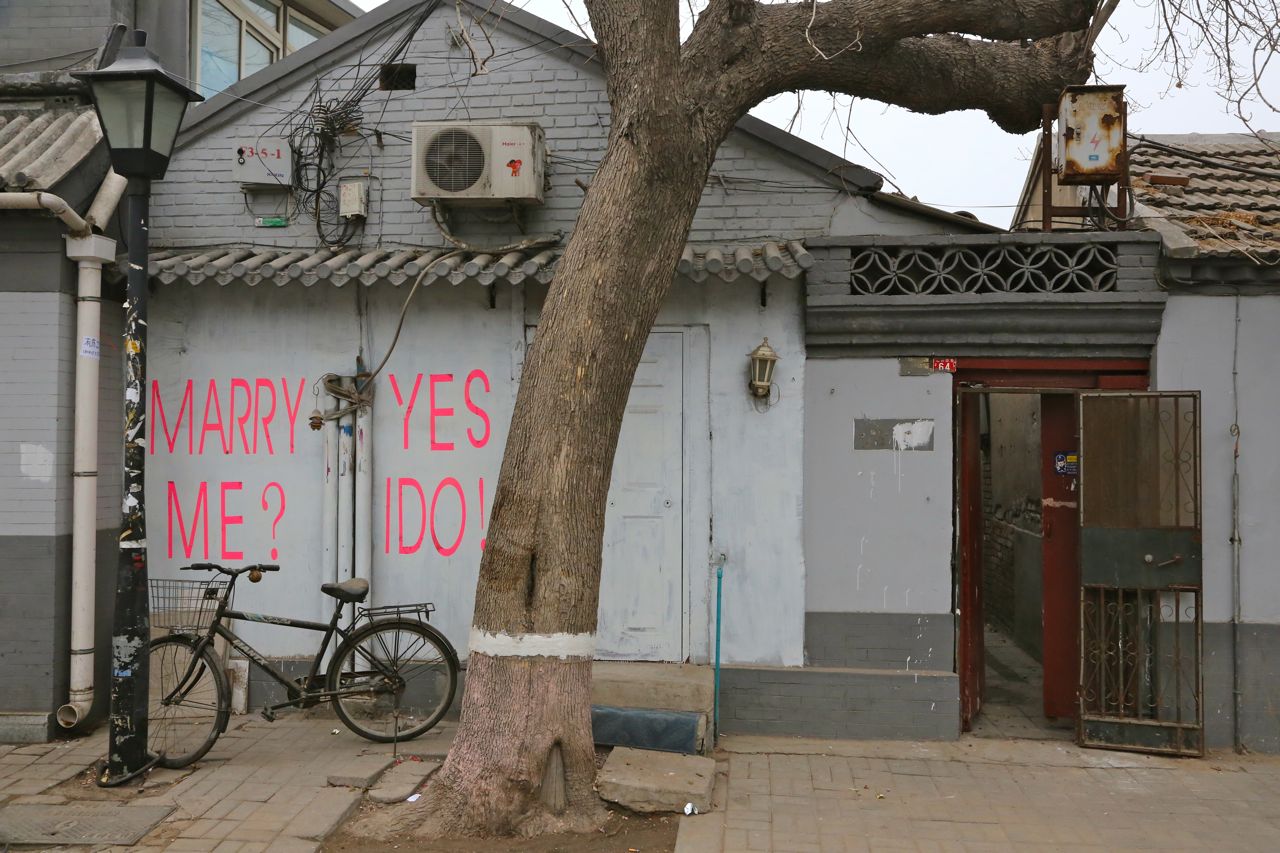 The streets around our hotel were interesting enough, but I had a few goals in mind that required me to go further afield... 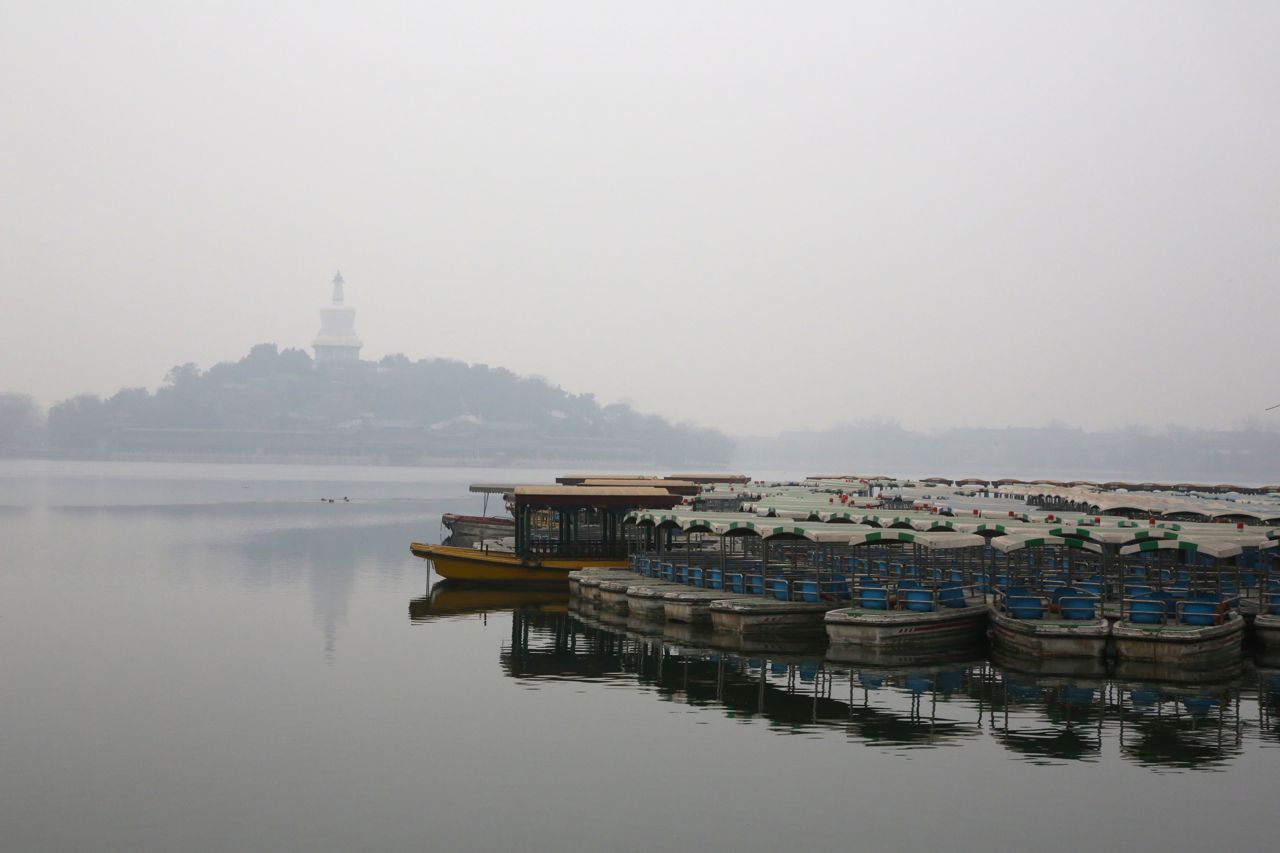 ...so I set out for Beihai Park, which surrounds a lake. On an island in the lake there's a large white Buddhist stupa, which you might remember seeing from a distance in my photo of the Forbidden City, posted yesterday. Now, standing on the lake shore, I could barely see it! 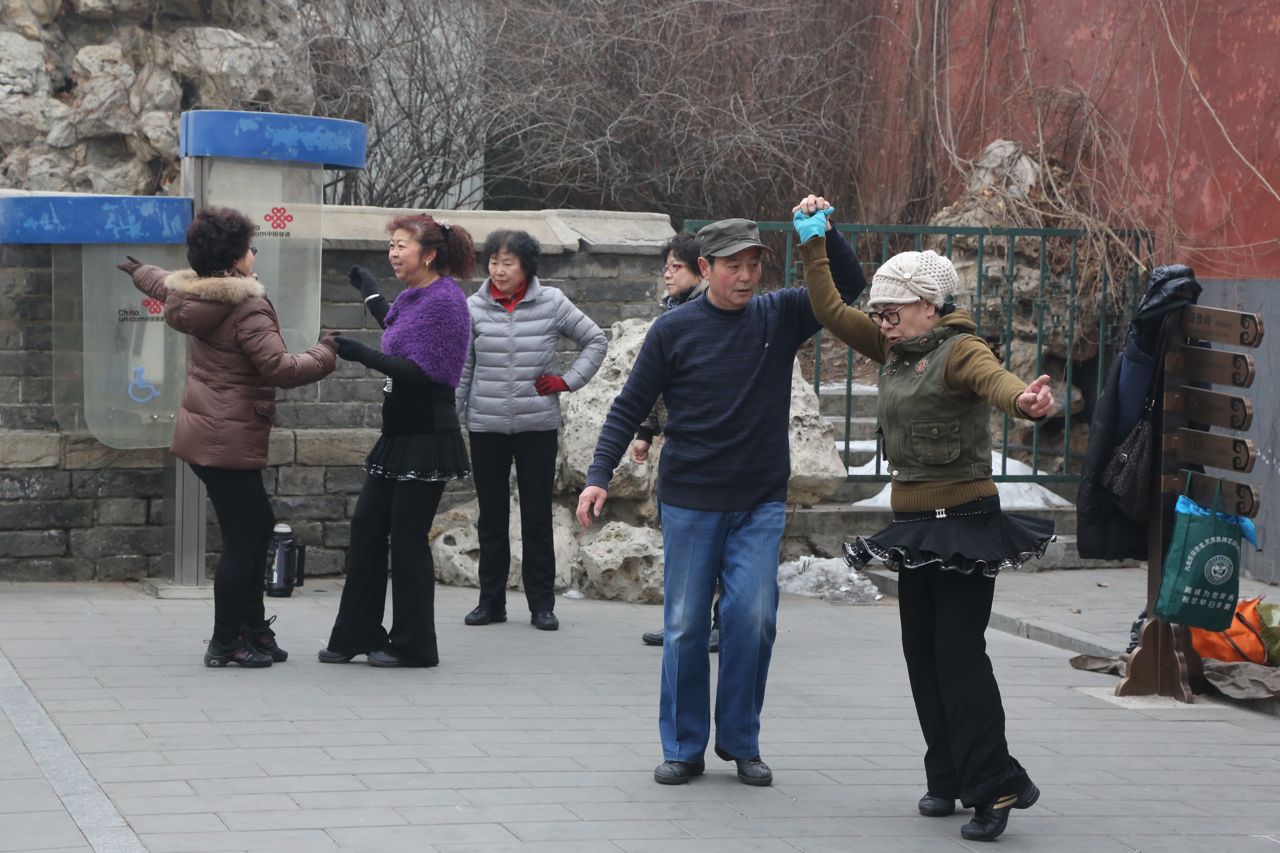 The smog didn't stop the Chinese, though. They were out and about as usual, many (but not all) wearing face masks. (I didn't even consider wearing a mask. I figured I was only there for a few days, and they apparently don't do any good anyway -- at least not the usual surgical paper masks.)

These folks were dancing in the park, which is apparently a popular pastime -- I saw lots of people swinging to Chinese pop tunes from cranked-up boom boxes. (Here's my video.) 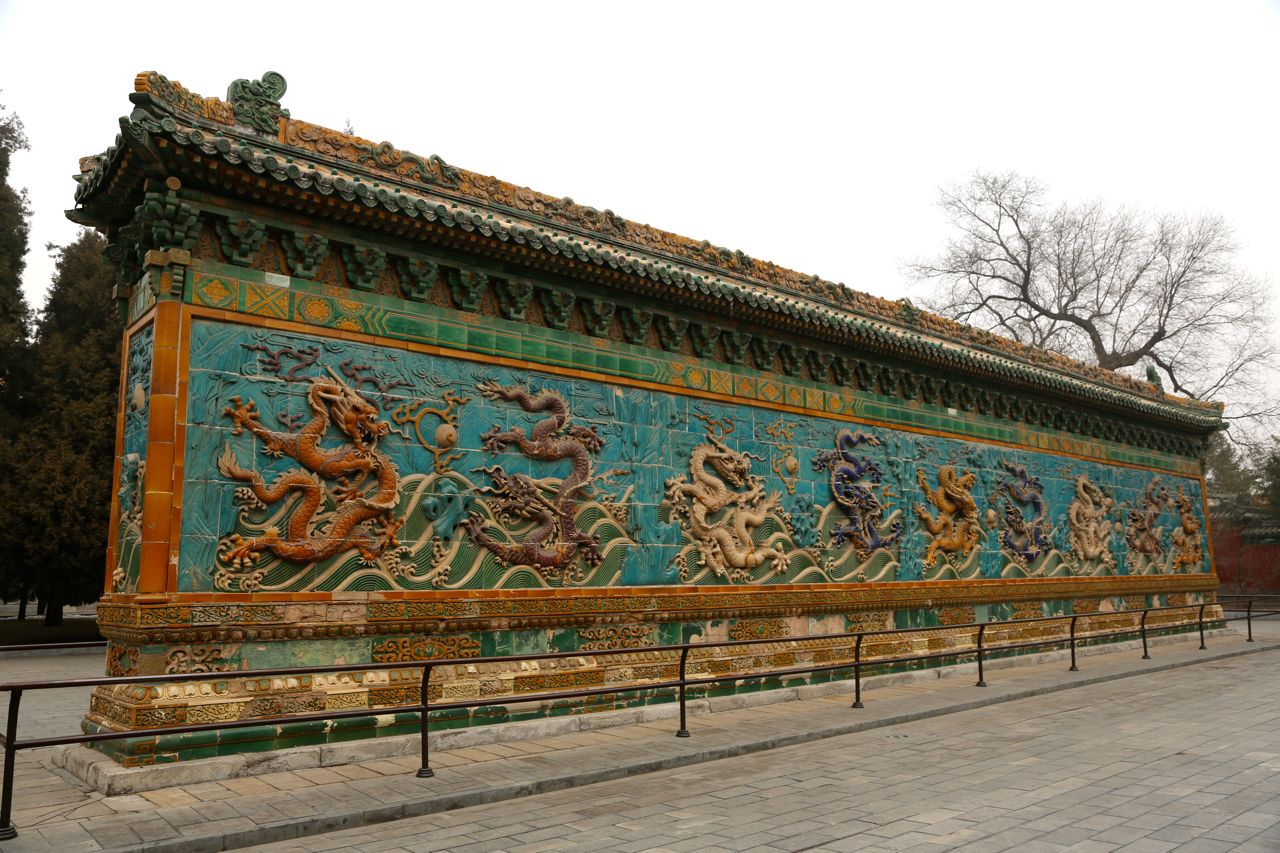 My goal in the park was the Nine Dragon Screen, from 1756, a brick and tile wall that despite its name actually features 635 dragons of various sizes! (Besides the big ones in the middle, they're all around the edges on the small tiles.) Pretty amazing. There were also some temples and other structures that were interesting, and I had one of Beijing's popular sweet yogurt drinks from a lunch stand.

Then I got on the subway (!) and went down to the Temple of Heaven Park, which contains several structures dating back to imperial China where rites of atonement and prayers for good harvests were offered. The structures are brilliantly painted with bright colors and are quite beautiful, though the effect was muted by the air. I had fun watching hordes of people playing cards and meandering the grounds, then took the subway back to our neighborhood. I grabbed a late lunch of noodles near the Drum Tower before rejoining Dave at the hotel.

The subway, by the way, was easy to navigate and cheap. (About 33 cents per trip, compared to about $4.67 for the London tube!) I love taking public transportation when I visit foreign countries. I learn so much that way.

That night, our objective was to find the perfect Peking Duck. We went (via subway!) to a restaurant that bills itself as Beijing's oldest duck restaurant, but were dismayed to find it is actually housed in a shiny glass-and-marble megamall full of glitzy shops. The duck was pretty good, and we even tried "duck web" -- yes, the feet, which were gristly and tasteless. I do not recommend them. Our side dish was meh, and overall, we were not that impressed. It was our least successful meal in Beijing. 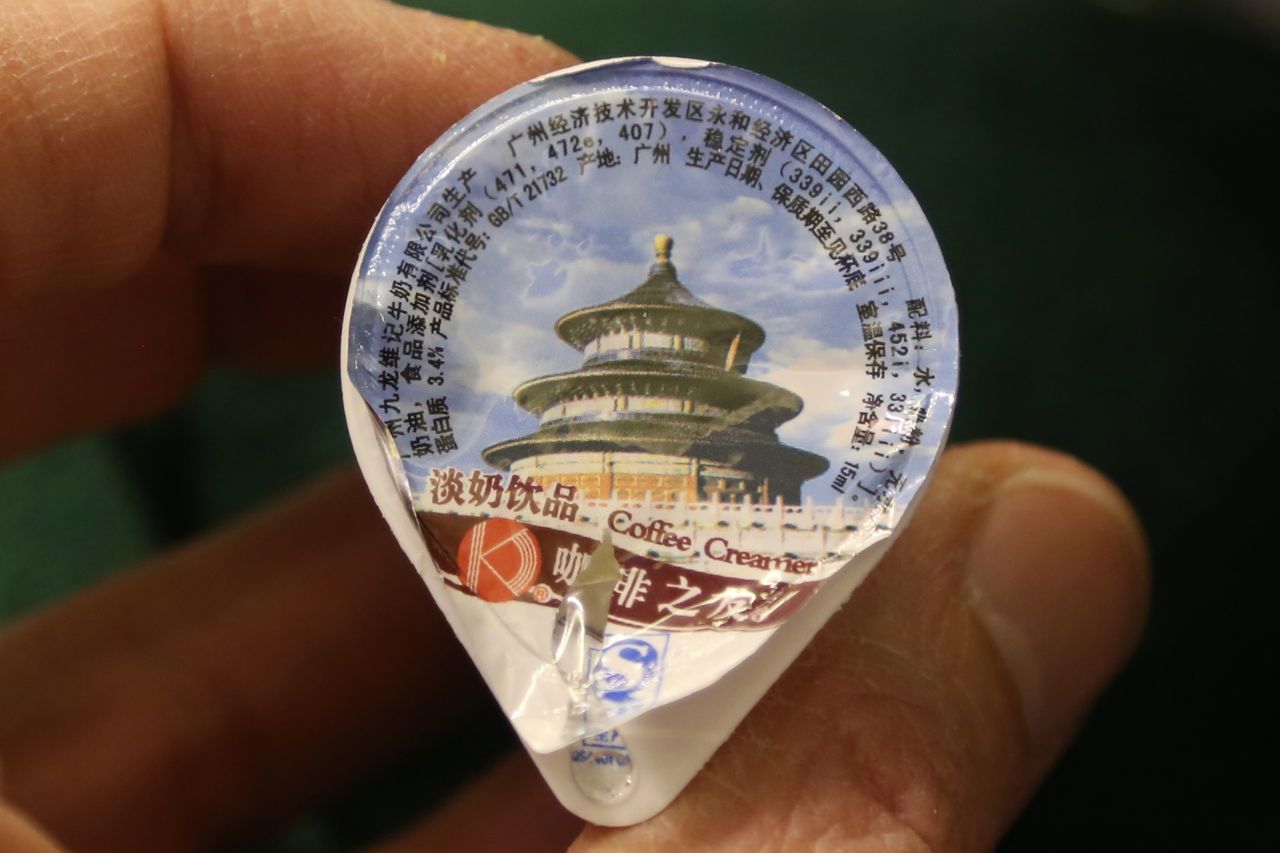 The next morning, we boarded our flight for home. I was glad I went to the Temple of Heaven when I saw that the creamers served on the airplane included a photo from the park!

Overall, we had a great time in China -- generally very good food, terrific scenery and history, interesting cultural moments. A well-worthwhile trip.
Posted by Steve Reed at 6:02 AM