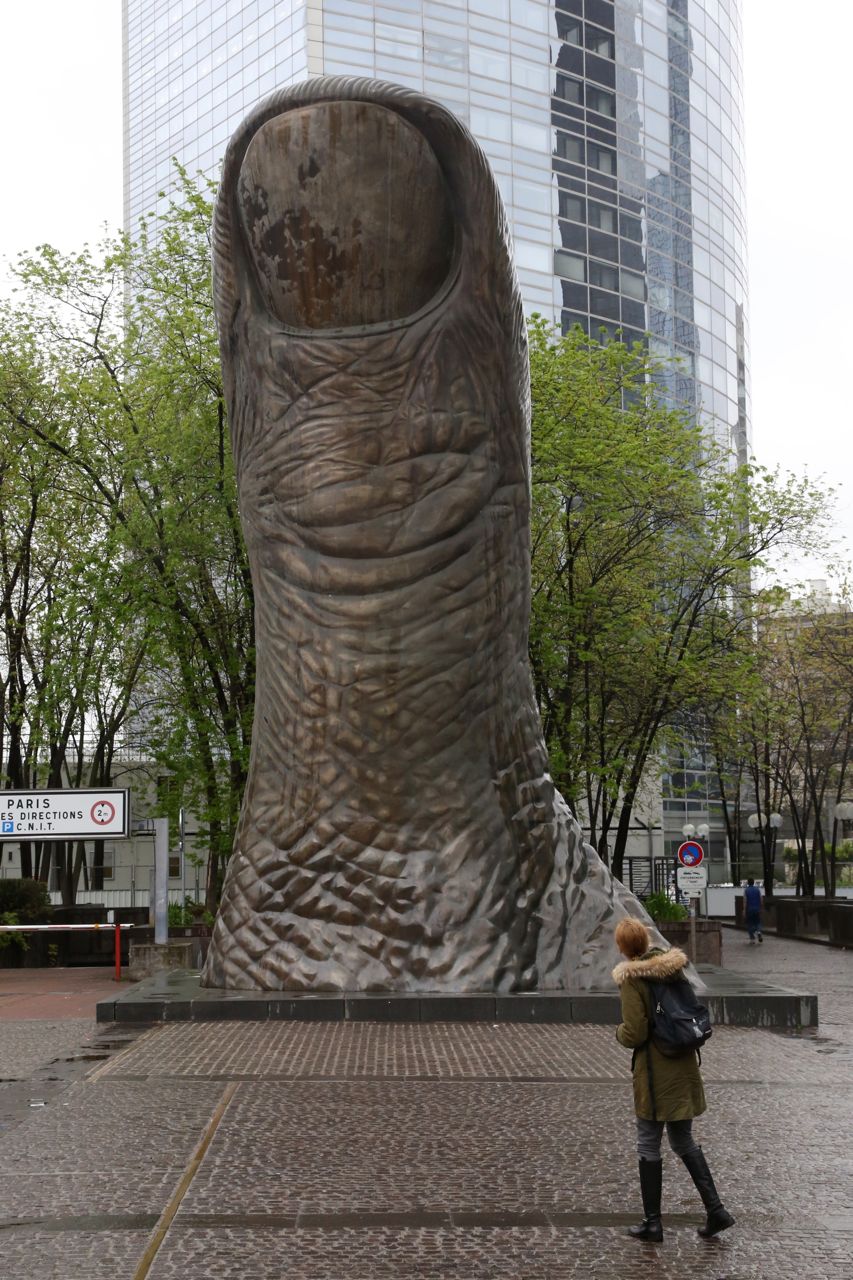 Reya and I enjoyed what can only be described as a very surreal day in Paris yesterday.

Oddities abounded at every turn. The street art followed us with strange and unsettling eyeballs. We encountered a giant thumb. We heard a busker softly play a sweet, melodic jazz version of "Hello Dolly" on a trumpet inside a subway car -- and then encountered a Gypsy orchestra on the platform. We wandered through courtyards within courtyards to find a hidden sundial. We found ourselves on a vast, windswept modernist plaza and inside a shopping mall with a Toys 'R' Us.

And of course we ate, and drank, and laughed. We had a terrific time. 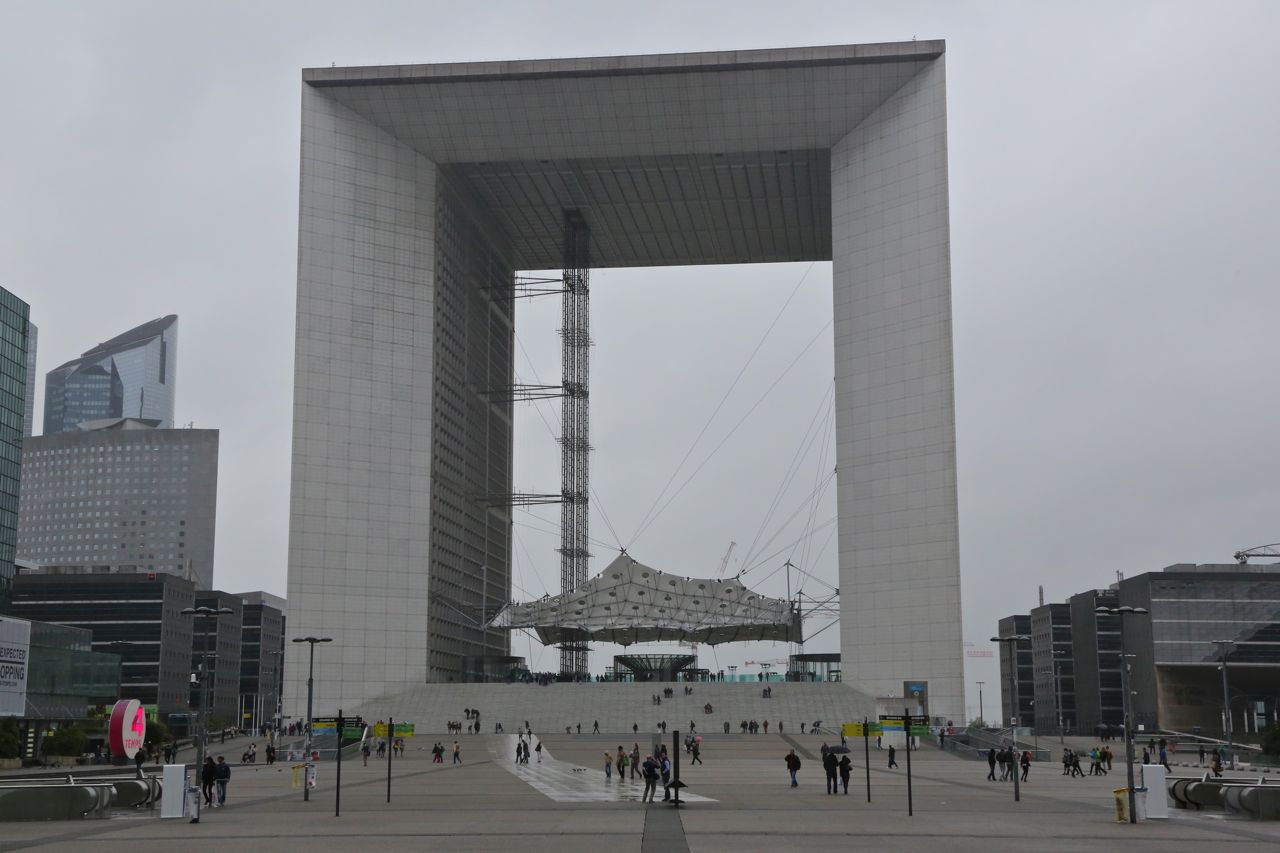 My objective on this visit was to see La Grande Arche de La Défense, the giant modern arch that looks out over the city from the skyscraper district of La Défense. I had never been out to this part of Paris, west of the city, and it is so different from the quaint, narrow streets of the old town. The arch (above) sits in a direct line with the Arc d'Triomphe and, beyond that, with Cleopatra's Needle in the Place de la Concorde. 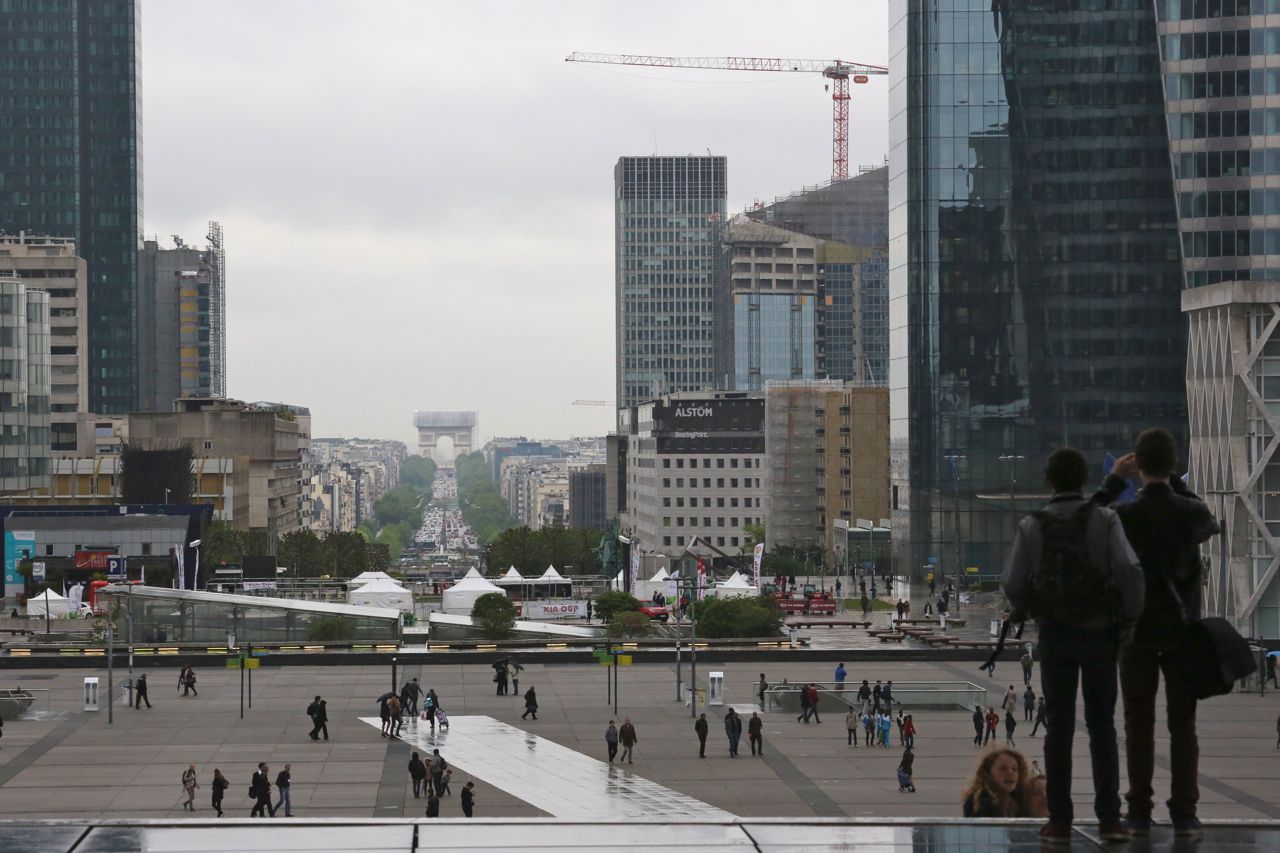 As you can see, the weather wasn't all that great, with light rain spattering intermittently. So we ducked into Le Dome, a shopping center just off the plaza... 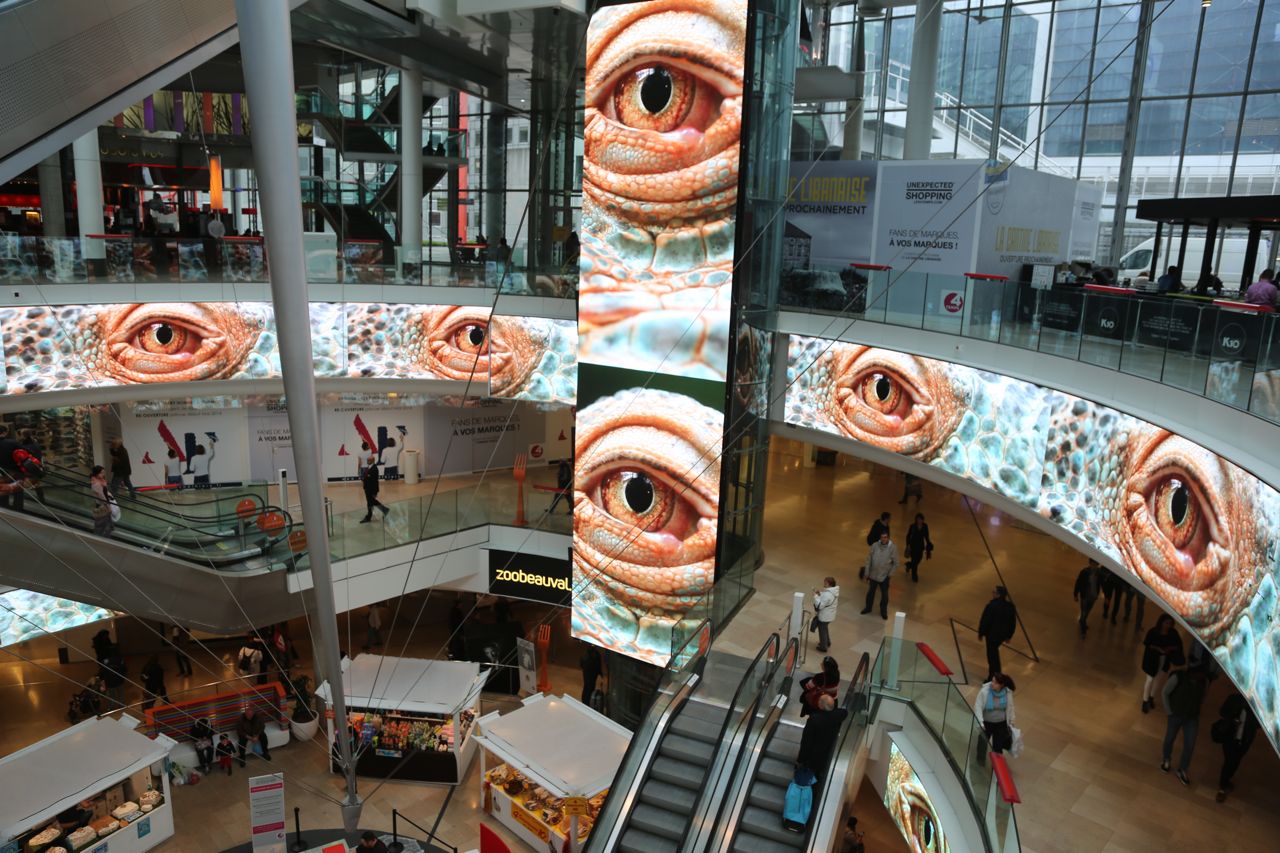 ...where we found an occasionally unsettling video display for a local animal park. (Thus began our eyeball theme.)

We visited César's sculpture "Le Pouce," or The Thumb, which clearly mystified not only us but other passersby as well (top). Then we hopped back on the metro and headed back into town. 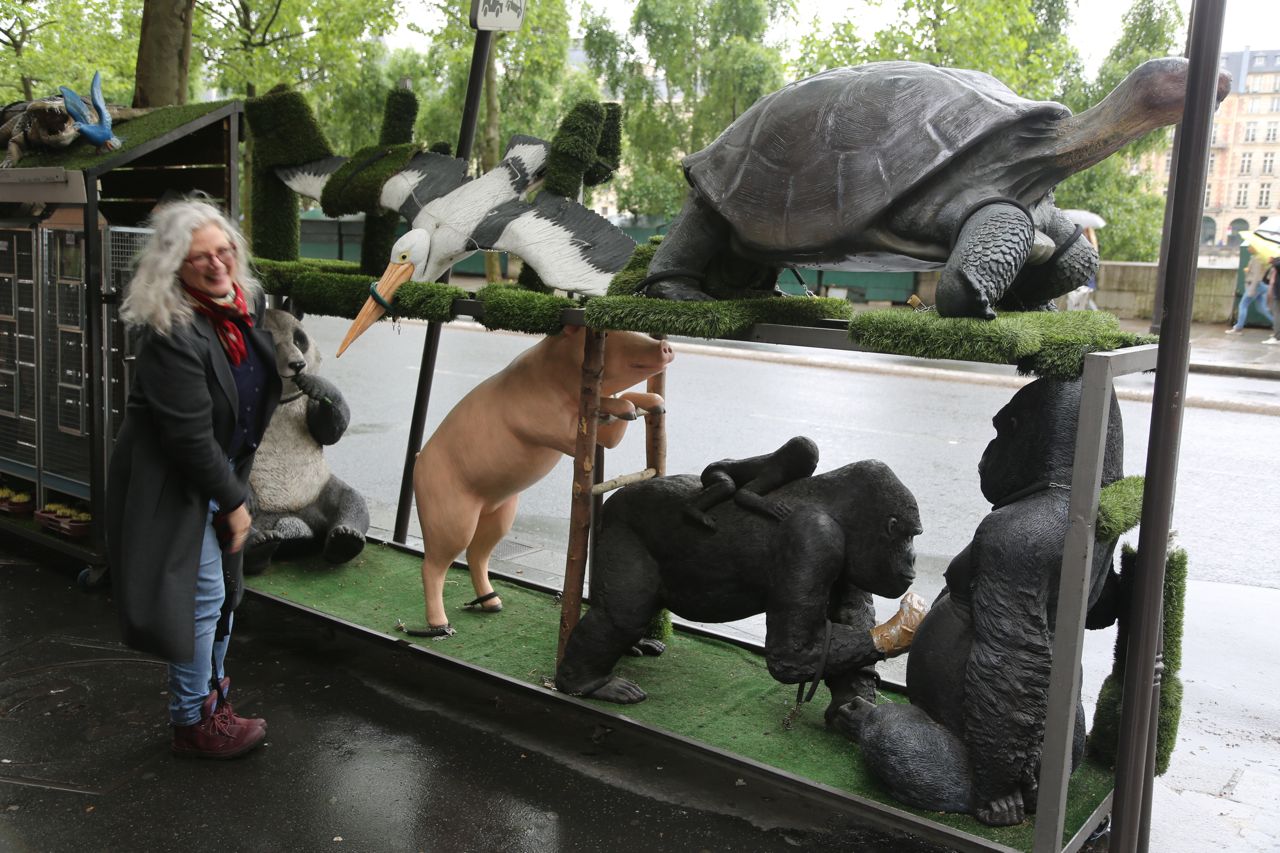 Reya had taken a photo days earlier of a bizarre display of plastic animals outside a shop just off the Seine. Because this is my kind of weirdness, I asked to see it, and she found it again. Who wants a family of giant plastic gorillas...in Paris?!

We had lunch in a little cafe called Le Gribouille. (According to Google that translates to "the Doodles," whatever that means. Doodles like drawings? I suspect it is in fact named after this singer.) Reya had salmon, and I had a cheese-and-lardons potato gratin -- so huge I could only eat half -- and we both enjoyed some crisp white wine. Then we searched out the sundial, off the placid, green Place de Vosges, before wandering through the Marais and enjoying the street art. 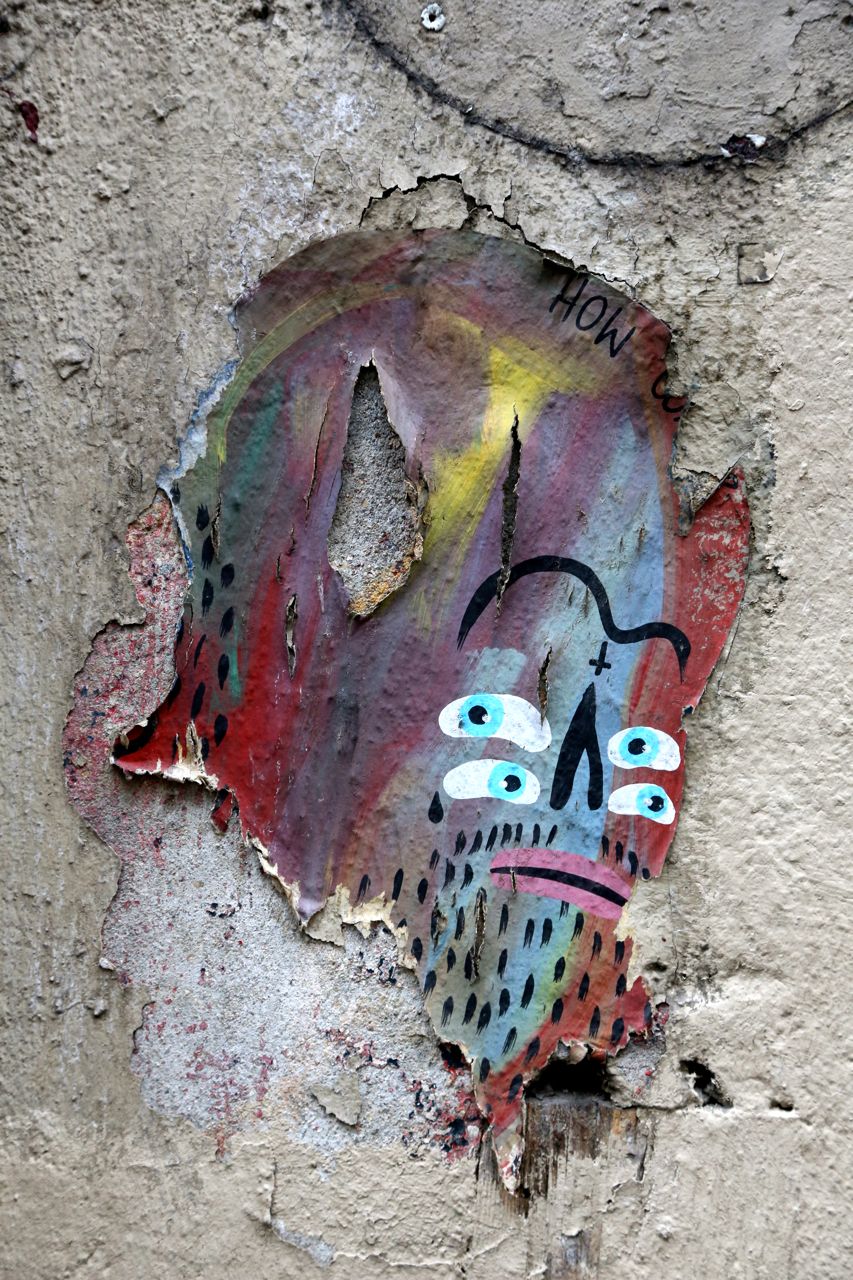 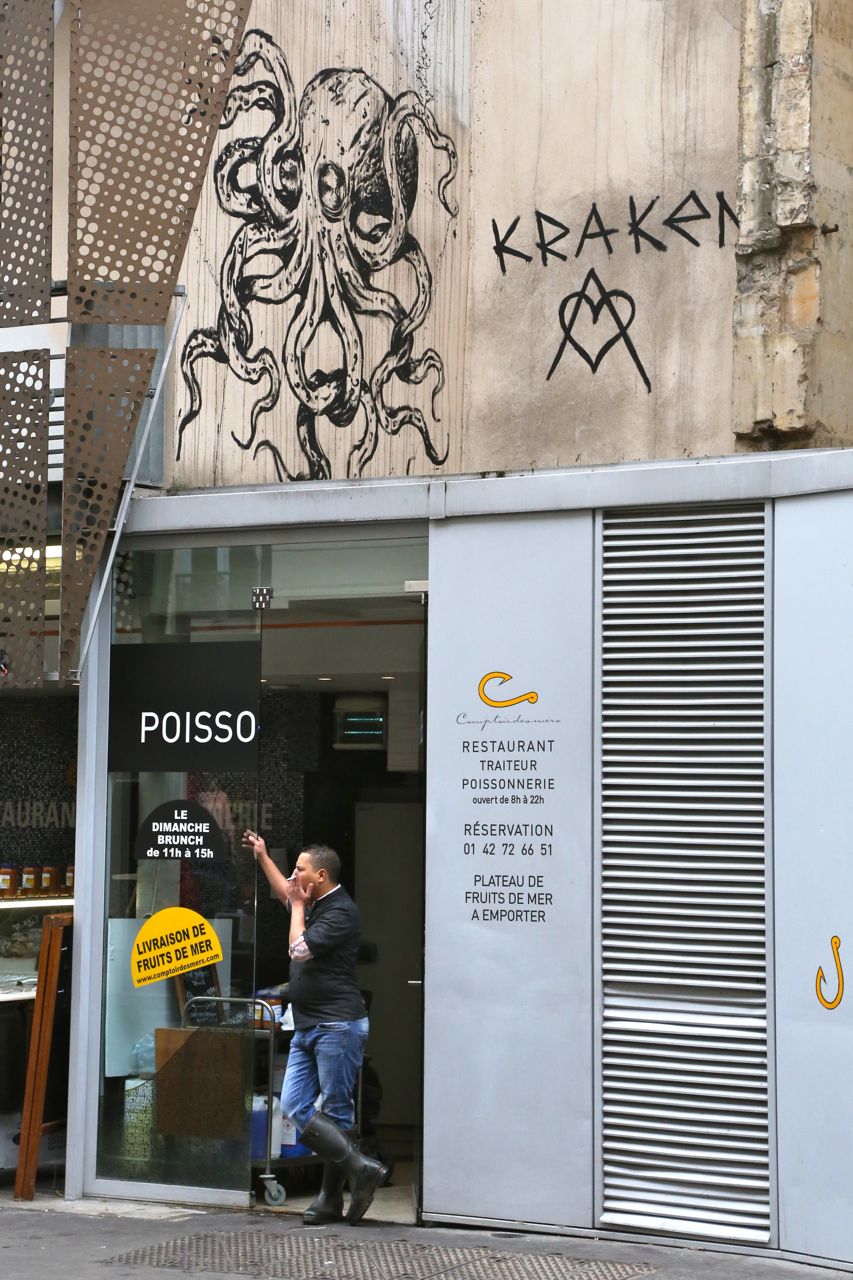 At some point in the Marais I checked the time, and was shocked to find it was 5:45 p.m. -- the day had flown! Reya and I walked a bit more and had a last-minute coffee at a cafe before I had to head back to Gare du Nord for my return train to London.

All in all, it was a terrific day. It was wonderful to reconnect with Reya, who is such a refreshing, positive presence. We can laugh about silly things and talk about deep ones. We have a rapport that I treasure.
Posted by Steve Reed at 8:24 AM