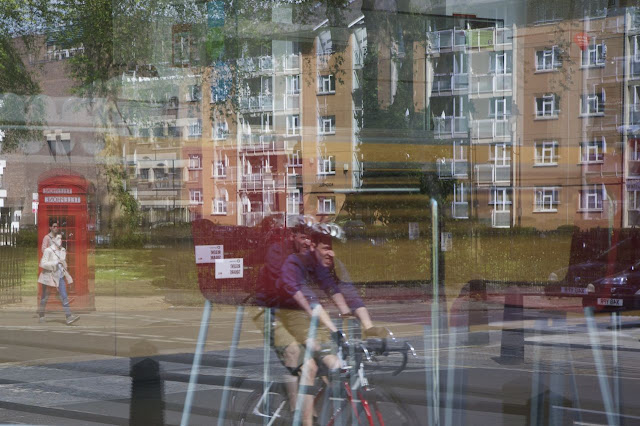 I took Olga to Hampstead Heath yesterday and someone stole her Kong.

Yes, like taking candy from a baby, someone took my dog's favorite toy.

Can you believe it?

It all began uneventfully enough. Dave and I were counting on an entire day of leisure, and I spent the morning cleaning the apartment. Then I got a text from my friend Susi reminding me that she and her husband were coming over to photograph Olga for a project she's doing. I had completely forgotten that plan, but it wasn't a problem -- Dave and I decided to go to lunch with them, after which he would come home to work on the garden and I would take Olga to the Heath.

After lunch, Greg and Susi decided to tag along to the Heath too. Of course, we brought Olga's Kong -- because, as you know, without her Kong to occupy her jaws, she is fatal to local soccer balls.

Well, it being a nice day, the Heath was packed with people -- possibly more crowded than I have ever seen it. Olga spied two young American guys playing catch with a baseball and immediately streaked over to try to intercept it. She ran between them, back and forth, for several minutes -- it was pretty hilarious to watch. (I don't think she's ever seen anyone play catch before.)

Apparently when she raced over to join the game, she dropped her Kong. I was talking to Greg and Susi and didn't immediately realize it. But when I got her away from those guys and told her to find her Kong, she couldn't. Which is very unusual. Normally she knows exactly where it is. The American guys said a woman had picked it up and asked them if it was theirs, and they said no. Apparently she took it, because it was nowhere to be found.

Now, I ask you -- if you were walking through a field full of people and dogs, and you found a warm, spitty dog toy lying on the path, would you pick it up and take it home?! I still can't quite believe it.

I'd just bought this Kong, too. So that was £20 out the window, and I had to order another one express delivery from Amazon last night.

And of course, because she didn't have her Kong, Olga got into all sorts of misadventures on the rest of her walk. She darted in and stole four soccer balls from unsuspecting people, at least one of which she punctured. (I heard the air escape: "fssssssss...") Everyone was quite nice about it and no children cried, at least not while I was there. But still.

This capped off a day of general misadventure. I forgot to put a battery in my camera, which is why there are no photos of Olga playing catch with those guys. I also pulled a weed out of our horseradish plant, only to find that it wasn't a weed at all, but a flower stalk -- our horseradish's first flowers. Oops.

(Photo: Reflections in a cafe window in Islington, on Saturday.)
Posted by Steve Reed at 6:05 AM