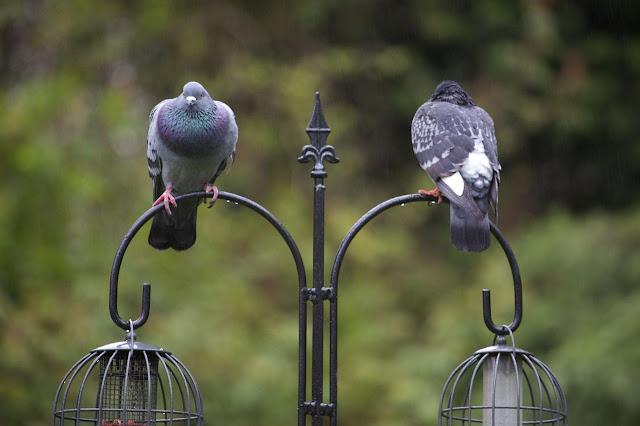 Have you ever heard of Lythrum virgatum Dropmore? I hadn't either until Dave bought some to plant in our garden -- and then I realized with horror that it's purple loosestrife, a plant that I remember well from my years in New York as an invasive. It's pretty, but in North America purple loosestrife has taken over thousands of acres of wetlands. I thought, "We can't plant this!"

But then I started doing some reading and it turns out that in U.K. gardens loosestrife is perfectly acceptable. Apparently is does have a tendency to seed itself quite vigorously -- unless the flower heads are removed before they go to seed -- but it's not dreaded (and certainly not prohibited) the way it is in parts of the U.S. For one thing, it's native to Europe, so as I understand it, it's not exotic to our ecosystem and it has natural pests that help keep it in line.

So I'm less nervous now about the loosestrife.

As I was reading about it, though, I came across a list of the 100 worst exotic invasive species, and on the list I recognized another name from our garden: Fallopia.

Dave planted Fallopia baldschuanica, or Russian Vine, on our fences. I've been wary of this vine from the beginning. It grows incredibly fast and it's already threatened to twine its way into our trees. The Fallopia on the exotic invaders list is not Russian Vine -- it's Fallopia japonica, or Japanese Knotweed, a sister plant. But still! I read enough warnings about Russian Vine in gardens that I've persuaded Dave to remove it. We're going to plant climbing hydrangeas instead.

And finally, another name on the list caught my eye: Euphorbia esula, or leafy spurge. We have lots of this stuff, too, or a very similar Euphorbia cousin. It was here before we moved in. And we like it, so we've left it, but man, it is a vigorous grower.

And then there's the borage, which one of my commenters recently warned would  "take over your garden when it seeds." We have a borage hedge growing at the back of our property. We have wisteria and rose vines winding up into our trees from the neighbors' garden. And there's English ivy, and persicaria, and purple buddleia, and our newfound forget-me-nots -- all vigorous growers.

I guess gardening really is a matter of constantly reining in the craziness!

(Photo: Another species that tends to proliferate wildly -- the pigeon.)
Posted by Steve Reed at 6:36 AM