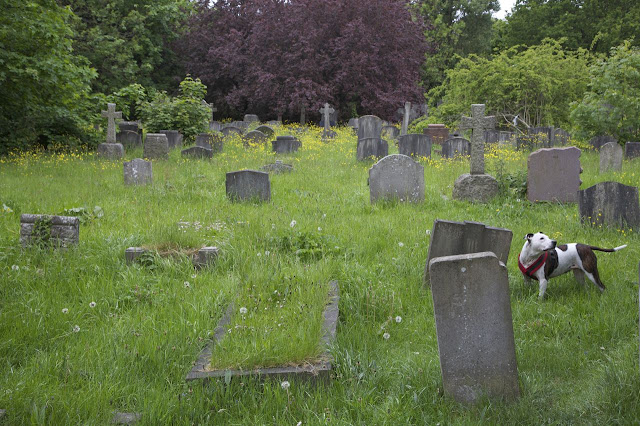 Olga and I took a walk in the cemetery yesterday, and a landmark event occurred: Olga killed her first squirrel.

I am not celebrating this. In fact, I feel terrible about it. But I suppose it was bound to happen.

She was running through the grass, Kong in mouth, when she heard a noise from a thicket. She crashed into the bushes as she usually does, and I laughed at her eagerness until I heard what I can only describe as a tiny squirrel scream. I ran to the thicket shouting "Drop it! Drop it!" When I got there, Olga was nose-first into a pile of leaves. She backed up to reveal an adolescent squirrel with no outwardly obvious injuries. It wasn't really moving -- just oddly flexing its little squirrel jaws.

We walked away to give it some time to recuperate -- I hoped it was playing dead. But when we went back a few minutes later, it was still there, and even the jaw movement had stopped. The prognosis was not good.

I can take a small degree of solace from the fact that gray squirrels are invaders in the U.K., displacing the native red squirrels. If Olga had to kill something, at least it was an exotic species. I suppose squirrels (and probably other critters) are particularly vulnerable at this time of year, when the new generation is young and clueless. Dave and I have discussed the need to keep her indoors early in the morning to protect the young fox(es?) in our garden. 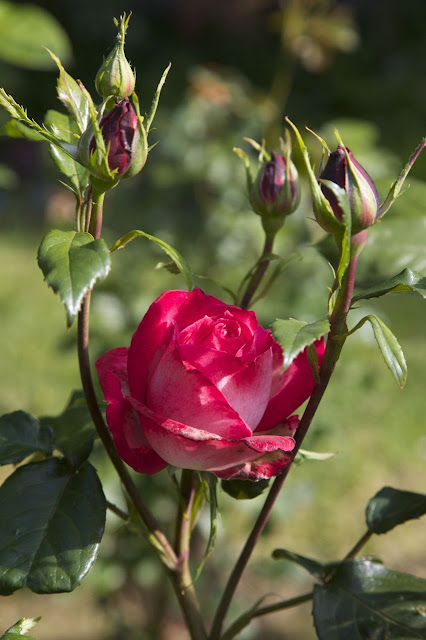 On a brighter note, our first rose of the year blossomed yesterday, and we have two other bushes that are just a day or two away from flowering. The blackberries are also blooming -- berries for cereal later this summer! And the ladybirds are still on the campion.

Last night Dave and I went to dinner with several others at our friend Keith's house, where we had beef bourguignon and several bottles of his co-worker's special stash of Châteauneuf du Pape. We contributed some champagne to kick off the evening. Now I am contributing some much-needed coffee to my system.
Posted by Steve Reed at 7:14 AM