And now for something completely different...here I am on Anna Maria Island! I drove down yesterday after picking up my friend Sue in Tampa. Her husband John joined us later in the day.

I'm always impressed by how different Anna Maria feels. It's not far from Tampa but it's much more colorful, more tropical. There are bright orange poinciana trees and scarlet bougainvillea vines. Your typical beach community, I suppose.

We drove down in my rental car after picking up lunch in Tampa. There I was, zooming down the interstate, one hand on the steering wheel and the other holding a pressed cuban sandwich. That thing was heavy enough to kill somebody if I'd hit them over the head with it. And it was good.

Once here, we watered the wilting plants at John and Sue's weekend place and walked to a nearby friend's house, where we had drinks and talked for a couple of hours.

John and Sue volunteer for the local sea turtle patrol, marking nests and helping to protect the turtles. This is the time of year when the nests hatch, and a few had done so just that previous night. So at sunset we made our way down to the beach to help dig out the hatched nests and count how many unhatched eggs remained, and free any live turtles that hadn't made it out by themselves. (I just took pictures. Only licensed people can touch the nests, eggs or turtles.) 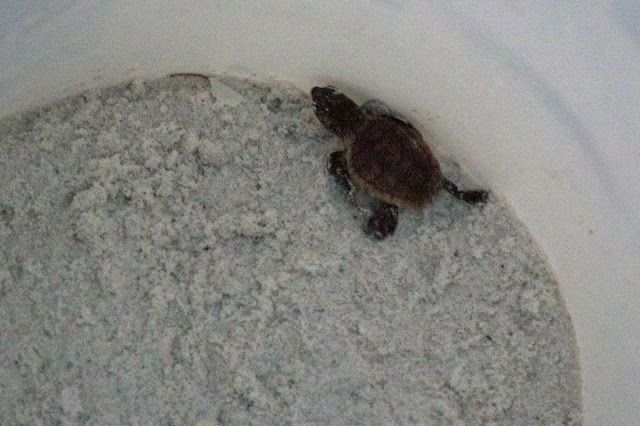 The nest Sue helped excavate turned out to have quite a few dead turtles in it -- some partly hatched, some entirely unhatched, some hatched but expired. It was sad. Apparently the recent heavy rains have washed out some nests and adversely affected others, like this one. At the end of the day, we counted 72 hatched eggs and about an equal number of dead ones.

But one tiny, live turtle was removed from another nest! He was put in a bucket (above), where he scrambled in circles until we released him on the shore. He promptly crawled into the sea and disappeared, to fight for survival against almost impossible odds.

This morning, we're off to find some yard sales!
Posted by Steve Reed at 12:11 PM