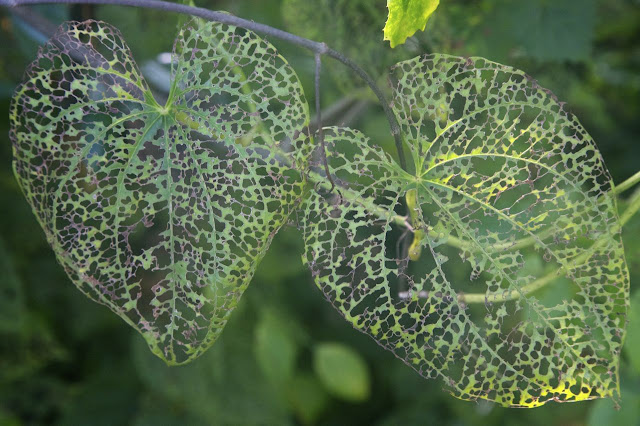 Florida has long been cursed by the presence of the air potato vine, which was imported to the United States more than 100 years ago and has since overrun a lot of native vegetation.

I'm used to seeing these vines, particularly around my dad's house, where they grow in profusion. As kids we used to pick up the inedible "potatoes" -- the round tubers that grow on the vine and drop to form new plants -- and I even grew one in a pot in my bedroom when I was a teenager. But on this visit I've been seeing something new -- the vines' leaves have been devoured, turned into a lacy remnant of their former selves.

I was mystified by this, because I was unaware that anything ate the air potato. I've never seen leaves looking like this before. I looked on the vine above but could not find the culprit.

Finally, yesterday, my brother and I were taking a walk when I saw another gnawed plant -- one not so far along in its destruction. I turned over a leaf and found this: 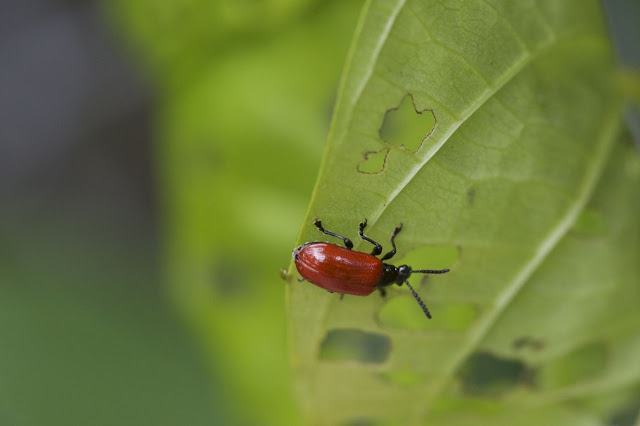 At first I thought it was a scarlet lily beetle, which you may remember was snacking on our fritillaria back in London. But as it turns out, this is a different species from the same genus -- notice it has a black head, while the lily beetle's is red. And this one only eats air potato. (Supposedly.)

For the past few years, the state has been experimenting with releasing these beetles in the hopes that they'll keep the vines from taking over. They certainly seem to be effective from what I can tell, at least in terms of thinning the foliage. Whether they'll ultimately kill the vines, I don't know.

I'm staying at my dad's house now -- actually in his guest house, which I wrote about a few years ago. I've never stayed in it before, but it's very comfortable. It's pouring rain (again!) outside, so I'm enjoying the sound of distant thunder and the heavy subtropical downpour.

I'm dying for a cup of coffee, but I tried the coffee maker and the coffee comes out tasting very lemony and chemically and strange. I have a feeling the machine was cleaned and descaled and not rinsed well. I'm going to run through a few more cups of water and see if I can rinse it out because I MUST HAVE MY MORNING COFFEE.
Posted by Steve Reed at 11:24 AM