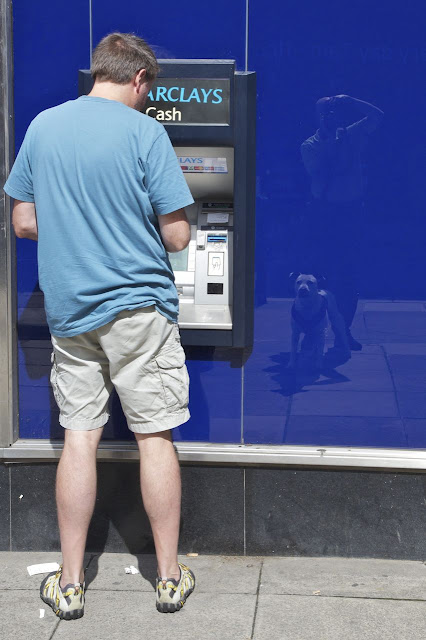 Dave and I have been having all kinds of drama with our bank. This is a very long story, but it basically comes down to the extensive security questions they always ask whenever we try to do any business with them over the phone. Dave can never get through these questions correctly. (We recently learned that the bank had an incorrect e-mail address on file for him -- it wasn't even close. Where it came from, who knows.)

Anyway, he recently had to cancel his bank card and get a new one. The new one only half-functions -- he can use it at an ATM, but he has trouble with it in shops. While canceling the original bank card, he also got a new code for logging into our account online -- and because he had been using my code, my online access was canceled. All this happened while I was in Florida, so I've been unable to get into the account for a couple of weeks now. And I'm the one who pays the bills!

Yesterday we tried logging in with Dave's new code, but because it must be used in combination with his membership number -- which isn't the same as the account number, and which he did not have -- we had to call the bank again. We're still not able to get into the account online. It's a nightmare. Dave has been threatening for years to dump this bank and go elsewhere, and this may push him over the edge.

Meanwhile, my online access is also being reset. I tend to have slightly better luck with this stuff, so we'll see whether it works. Stay tuned. 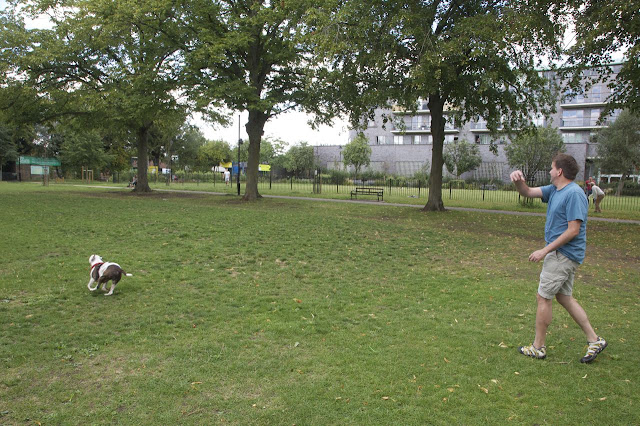 After struggling with the bank, we got some other errands done. I signed up for French beginning in September, and we took Olga to Fortune Green for a long session of Kong play and a loop around the cemetery.

I tried to order a Waffle House t-shirt -- but they wanted to charge me $18 for overseas shipping! That's just insane. That's more than the cost of the shirt. I'll wait until we're closer to Christmas, when Dave and I will be returning to Florida, and I'll order it then and have it sent to my dad's house.

I also picked a bowlful of blackberries from our bushes, and Dave made a blackberry and apple cobbler -- as suggested by Yorkshire Pudding, whose ongoing attempts to get me to "speak British" included correcting my use of blackberry to "bramble." (So it's a bramble cobbler? That doesn't sound edible. But OK -- I'm in England, I'll roll with it.)

Anyway, we didn't eat the bramble cobbler last night, because in the afternoon Dave began talking about having a headache and not feeling well. We took his temperature and it was 101º F. Yikes! And with the beginning of school just days away! He went to bed, and the cobbler remained in the fridge. We'll try it today.

(Top: Family portrait with cash machine. Bottom: Olga and Dave at Fortune Green. The Kong, which Dave has just thrown, is the black speck in mid-air just to the left of the middle tree.)
Posted by Steve Reed at 7:27 AM