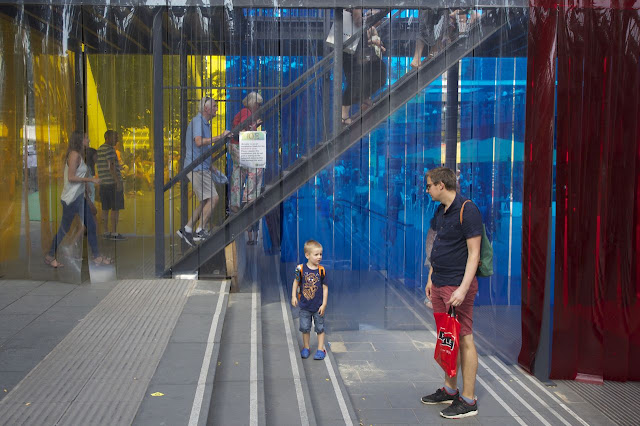 The BP portraits show yesterday turned out to be terrific, as always. I met up with Sally at a deli near Leicester Square, where we grabbed lunch (falafel pita!) before walking over to the National Portrait Gallery. These BP shows always take portraiture beyond the staid, realist images that we think of as portraits, and advance into the unusual. Here's an online gallery of the exhibitors. My favorites were this one and this one -- I love the lines and composition, the echoing shapes, of the second one, as well as the idea of a portrait depicting someone as a rather anonymous figure, from behind.

Anyway, it was a cool show -- for a hot day! We did indeed have crazy warm weather yesterday. I set out from home in a long-sleeved shirt and a pair of jeans, and within a couple of blocks decided to turn around and come back to the house so I could change into shorts and a t-shirt.

Before I met Sally I spent a little bit of time in Trafalgar Square, photographing the crowds out enjoying the sunshine. And after the exhibit, she and I walked across the river toward Waterloo, and I spent more time taking photos around Southbank -- like the photo above. Those colorful strips of heavy, clear plastic made for great photographic effects. 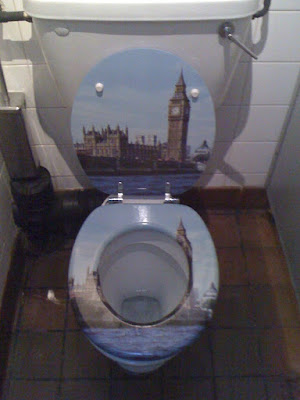 I almost forgot to show you these awesome toilet seats from the pub where we went on Friday night! It seems very British to mock Parliament by putting the noble edifice of Westminster Palace and Big Ben on a toilet seat. "Taking the piss," as they say -- by which they mean making fun of someone or something, deflating an inflated ego.

Would Americans put the U.S. Capitol or the White House on a toilet seat? I dunno. Maybe we would. 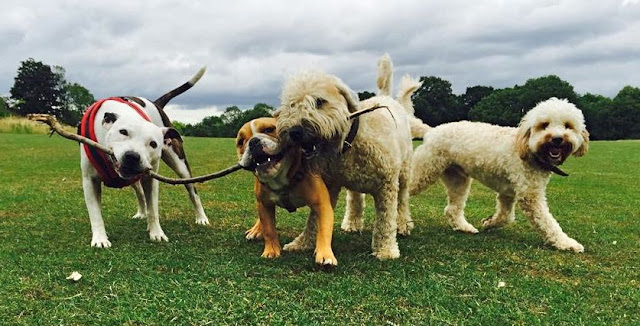 Finally, here's Olga with some pals in a photo taken by her dog-walkers. I found it on their Facebook page. Olga gets along with other dogs but I don't think she's hugely social -- in many of their photos she's off by herself, chewing a stick or a ball. I liked this one because she was actually playing and interacting.

Speaking of which, I'm off to take her to the Heath. It's supposed to rain this afternoon so I want to get her out early!
Posted by Steve Reed at 6:56 AM