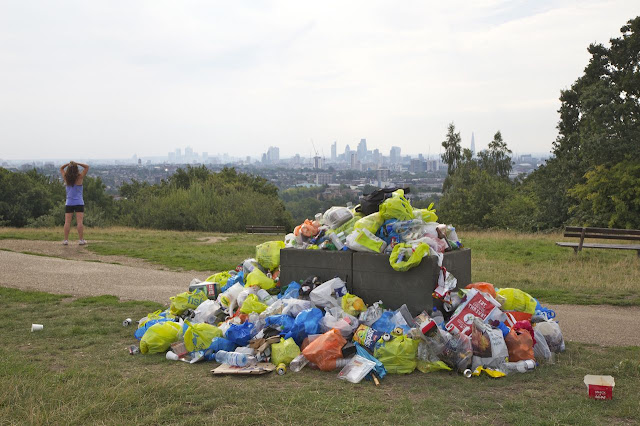 Olga and I made it to Hampstead Heath yesterday morning, before the rain began. We found several peculiar mountains of trash just like this one, atop Parliament Hill. Is this merely a sign that the Heath was incredibly crowded during Saturday's beautiful weather, or was there some special event that generated such debris? (Mostly cans, bottles and food wrappers, from what I could tell. The aftermath of a massive, drunken picnic.)

Included in the trash were stacks of beer cans taped together to form a single long cylinder. I'd never seen this phenomenon before:

With the help of Google I learned that this is called a "Wizard Staff," and is the relic of a drinking game whereby people tape their empties together, drinking only from the topmost, full can. This way, they progressively build a staff while becoming a very Wise Wizard. (This dude -- and I'm about 90 percent sure it probably was a dude -- drank NINE large beers, which must have made him very wise indeed.)

Anyway, anthropological observations of picnicking aside... 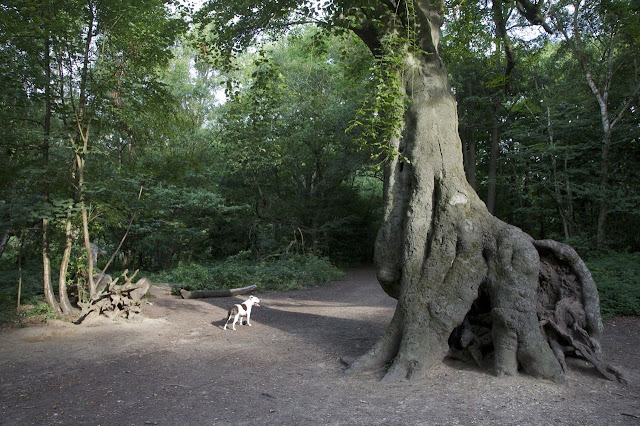 ...Olga and I had lots of fun walking, as usual. And then the rain came, by which time we were safe and dry at home. Dave and I watched a movie called "Chef" with Jon Favreau that we liked a lot, and then Dave took Olga out in the damp yard to play Kong while I cleaned the house, and Olga raced in to prance with muddy feet all over the newly cleaned, pristine white bedspread.

I could have killed her. But out of an abundance of patience, I only yelled at her to GET DOWN. (I wished I'd been sampling from my own Wizard Staff right about then.) I let the mud dry and vacuumed the bedspread last night before bed, which got the worst of it -- at least the loose bits -- before we went to sleep.