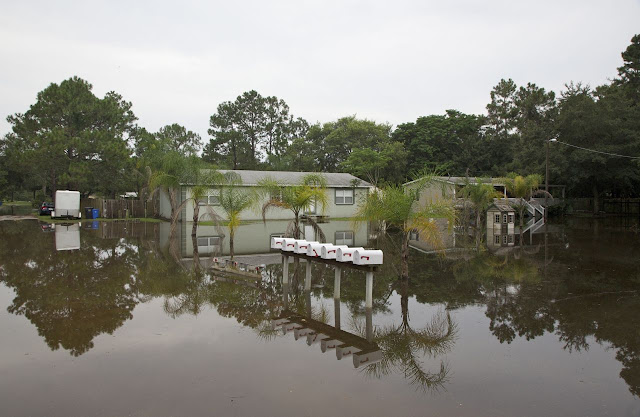 Once again, we had a crazy amount of rain yesterday -- six inches in the area where my dad lives. This (above) was the scene not too far from his house. A lake in someone's front yard! We've had so much rainfall that the water has nowhere to go. The ground is saturated. 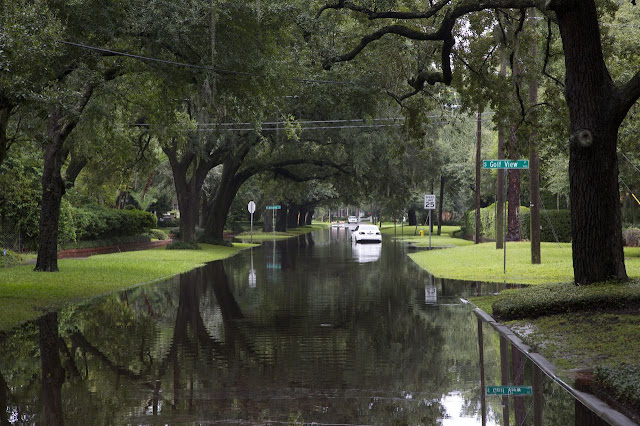 I had lunch scheduled with some friends in South Tampa, including one who was driving all the way from Orlando. I contacted them in the morning as the rain poured outside, and said, "Are we sure we want to do this?" But we went ahead, even though parts of South Tampa are notorious for flooding, especially when high tides in the bay back up the storm drains.

I got some advice on which streets to take and got down there without too much trouble. There were a few occasions when I had to drive my trusty rental car very slowly through several inches of water. I did not try to pass the street above. See that disabled white car? Someone made a bad decision.

In fact, I got to my friend's neighborhood about a half hour early, so I popped into a Salvation Army thrift store and found a great t-shirt for 99 cents! Woo hoo! 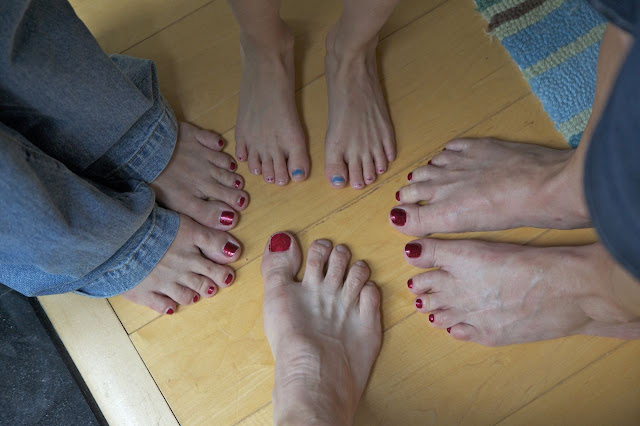 My friends Cherie, Lynn and I -- and Cherie's two young daughters -- wound up having a fun lunch. I've known Cherie and Lynn for decades, from back in my earliest days of newspapering. They realized that they were wearing the same shade of nail polish on their toes, called "I'm Not Really a Waitress." Cherie readily provided the bottle so I could join the club for a group photo. (That's Cherie's daughter at the top, who was doing some kind of patriotic thing of her own.)

I only painted my big toe. And yes, I removed it before I went home. I only brought sandals on this trip and I wasn't ready to walk around for another nine days with one big red toe hanging out there.

Anyway, by the time I got back in the car for the journey home, the rain had stopped and driving wasn't quite so perilous. Today I think we may actually be rain-free!
Posted by Steve Reed at 12:10 PM

I admire your commitment in only bringing sandals with you on this trip. Perhaps this is why packing is so stressful for me: I always think I have to prepare for every eventuality. That is some serious rain water in your photographs.

That is seriously my favorite shade of nail polish. OPI makes it.
Gibson has purple painted toenails right now. He's rocking it.

we had such a rainy winter, spring, and early summer that I can't believe I'm about to say this...I wish we could get some rain. it is so dry here there are huge cracks in the ground.

Wonderful photo. I posted a similar one after a visit with some girlfriends except in our photo, bunions played a central role.

oh my gosh...i too only use that color of nail polish. ha ha!!!
keep having a great time!!!

The amount of flooding there is amazing. The weather is certainly crazy everywhere. You are such a good sport doing the nail polish photo shoot. What fun!

Yikes, that's a lot of water. I'm sure those poor people have water inside their homes as well. Crazy.

Why only one painted toenail? Why not the rest? :)

That water reminds me of our Lake Erie trip - scary! Glad you had fun. Love the toe!

I linked to your blog this morning...Thanks for the visit yesterday!

Water wings...I hope you packed them! I love your big toe!

37P: I am famous for minimalist packing. I must say it seldom fails me. I don't remember a time when I've lacked something I truly needed. But you know, it really IS easier for men, unfair as that is...especially men with no hair care requirements!

Ms Moon: I'd never heard of it, but since I've told this story to people I've had about a million tell me they LOVE that color. Who knew?

Ellen: I wish we could pass along some of it to you. Bucket brigade!

Marty: LOL! What IS a bunion? Or do I want to know?

Vivian: Funny! What makes it even better on our end is that my friend Lynn really WAS a waitress while in college.

Lynne: Doing them all just seemed like too much work! I think those houses are built up to avoid this standing water. I imagine that area floods periodically and they know to expect it. (Which doesn't make it much better.)

Bug: We have our own Great Lakes, at least for the moment!

E: It was great to see you! I too think your camera is officially dead. I'll bring you my Canon point-and-shoot when I come in December. (Remind me!)

Linda Sue: More like a canoe. I wouldn't swim in that water, but I might boat in it.