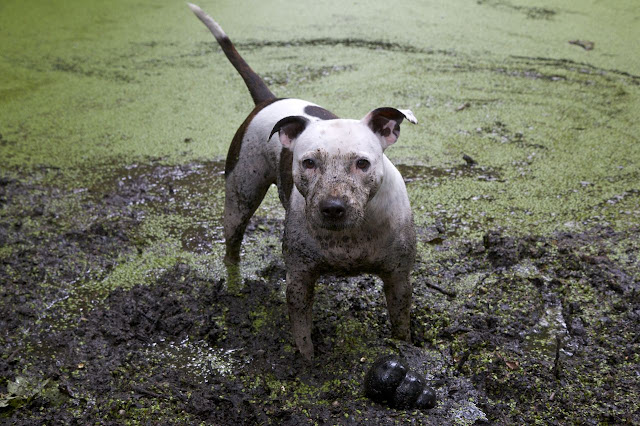 I took Olga to Sandy Heath yesterday, where, once again, she had a fine romp in the muddy pond. She actually attracted a small crowd of spectators watching her lazily stretch in the water, roll onto her sides and push her face into the mire to keep track of her Kong. She put on quite a show.

The Kong itself disappeared under the water several times. I worried I'd have to go in after it -- but she always retrieved it, sparing me the indignity. And believe it or not, all that mud simply fell off after she air-dried during the rest of her walk. By the time we got home, she was clean as a whistle. She didn't even need a bath. Teflon dog! 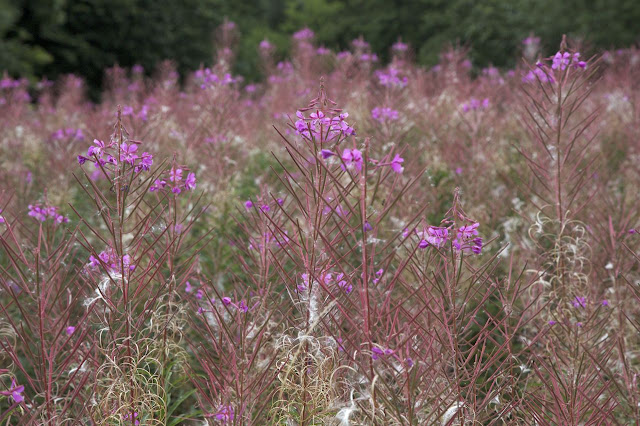 The rosebay willow is going to seed now, as are many of the other flowers from earlier in the year -- the thistles, and those yellow clumpy daisyish things. Nothing gold can stay, as Robert Frost said. (Nothing can stay, period!)

I'm finally reading my friend and former co-worker Kenneth's memoir, "Wasn't Tomorrow Wonderful?" which I ordered from Amazon more than a year ago.  Kenneth, the blogger behind Kenneth in the (212) (where my photo appeared once, back in my journalism days!), is about my age and I identify with a lot of the cultural landmarks he cites in his essays about growing up gay in Michigan and Arizona (Olivia Newton-John, Billie Jean King's palimony lawsuit, "All the President's Men," Asteroids and Space Invaders at the local video arcade). Kenneth's blog attracted so much attention and so many followers that it led to this book deal, and although the blog itself is padded with photos of hunky men and occasionally snarky celebrity news, Kenneth is a good writer. I've always liked his more personal posts. He has produced an engaging, candid memoir, and I'm really enjoying it.

He mentioned what, for him, was a watershed TV moment -- an appearance by Kate Jackson on the Tonight Show in 1982 where she discussed the movie "Making Love" and was booed by the audience after bringing up homosexuality. I'd never seen this clip but it's on YouTube -- you have to sit through several minutes of awkward banter before you get to the good stuff. That interview did for Kenneth what the swishy gay characters on "Barney Miller" (at minute marker 12:44 in this clip) did for me -- it illustrated the public aversion toward gay people and helped reinforce his own teenage self-loathing. It's interesting that such seemingly insignificant moments can cause pain deep enough that we never forget them.
Posted by Steve Reed at 7:39 AM