A Painted Lady, and Linguistics 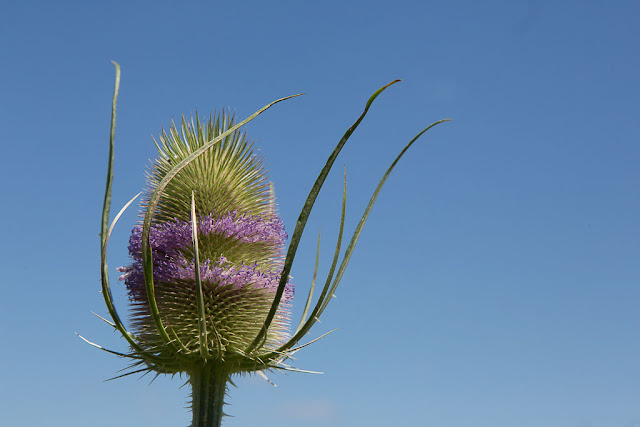 Yesterday was bright and sunny and relatively warm, so I seized the moment and spent the day outside as much as possible. I mowed the lawn in the morning, and then took Olga to Wormwood Scrubs.

There, we found the wild teasels in bloom. These plants are pretty impressive -- they're as tall as I am (about 6 feet) and they produce spiny cones that eventually dry out and turn brown and rattly and last all winter. Each summer brings a new batch of cones, and tiny purple flowers appear in rings that move up and down the cones as the blossoms mature. The bees love them.

As I was photographing them, a woman stopped and chatted me up, asking what they were and whether she could get some for her garden. I told her we bought 3 teasel seedlings through the Royal Horticultural Society, so it's certainly possible. Ours aren't as far along as the ones at the Scrubs, maybe because they get more sun there, in that wide-open meadow environment. But ours should be blooming soon, too. 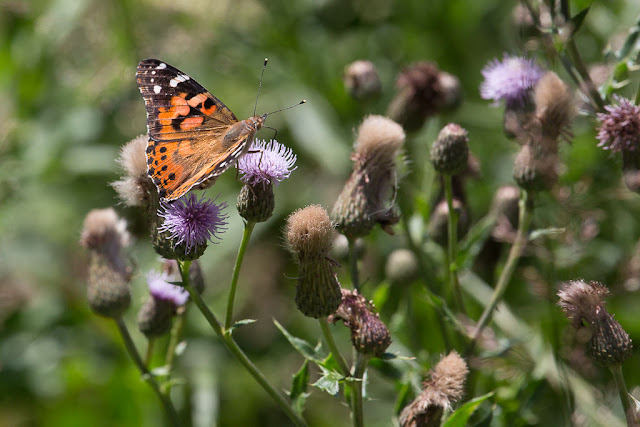 Also on the nature front, I saw a new (for me) butterfly -- a painted lady. We have lots of orange butterflies flitting around at this time of year -- there are also small tortoiseshells and commas, both of which I've photographed before. (Speaking of commas, I saw one in our garden again yesterday morning, and did I have the camera handy? No.) 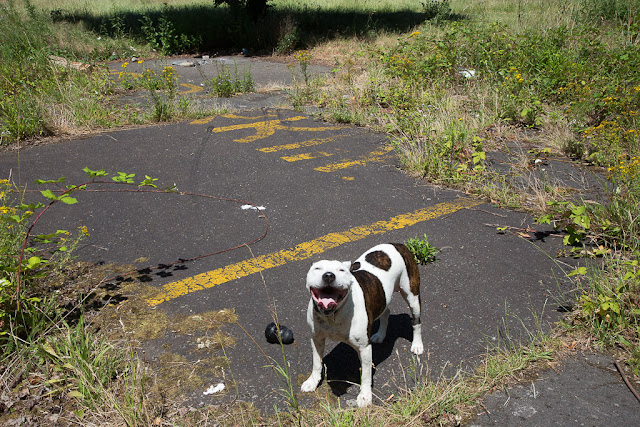 Olga loved her walk, as usual, and we even explored an old parking and picnic area, now closed and overgrown with weeds. As many times as I've been to the Scrubs, I've never walked through this particular area before.

Olga got very warm, though, and she was dragging a bit by the time we got back to the train. Then the trains were briefly delayed because there was a freight train sitting on one of the tracks and the conductor couldn't be reached to move it because he was "stuck in traffic." (?) By the time a passenger train was able to get through, it was pretty crowded. On board, I stood next to a British family  -- man, woman and boy -- who spent the trip making fun of the way Americans pronounce certain words. (I hadn't said anything, so they had no idea I was American.)

They mocked our pronunciation of oregano (Americans emphasize the REG, but Brits accent the GAN) and basil, which Americans often pronounce "baysil" rather than "bazzil." They cycled through some others, including depot and leisure.

This was all very amusing, and the woman told about going to Tennessee and being awed at the local accents, but just as she said something about how difficult Americans could be, my stop arrived. Which is probably just as well. Olga and I got off the train and went on our way.
Posted by Steve Reed at 7:01 AM