The Driveway, and a Cicada 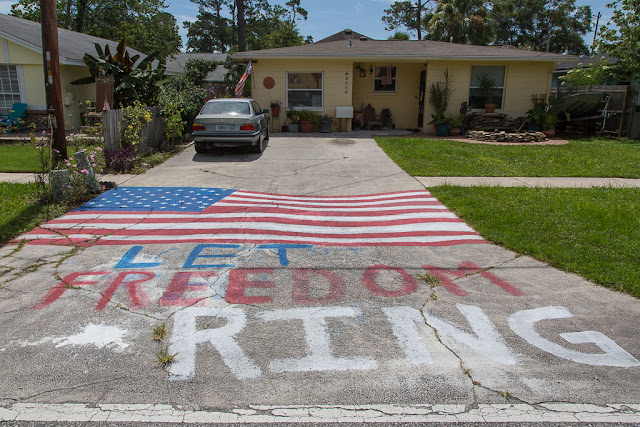 I'm back at my brother's house now. (That's not it above.) I think my poor mom needed a break from playing host!

This super-patriotic driveway is in Atlantic Beach. We saw it on car repair day but I couldn't shoot it because we were unable to stop. But I couldn't get it out of my mind, so when Mom and I went to Castaway Island on Friday I made a little detour and revisited it. I'm so glad I did. It's definitely too flag-wavey for me politically, but it makes a great photo.

Last night we went to dinner at a Mexican place in an old municipal building, where they seemed thoroughly perplexed by my order of a gin martini. I suppose it's not a common drink at a Mexican place. But they cranked one out, even with olives, and it tasted fine.

Then my brother indulged in one of his impromptu driving tours of the city, taking us through downtown and down the west side of the river. I'm always up for sightseeing, and my brother loves to drive. He doesn't hesitate to take the long route anywhere. 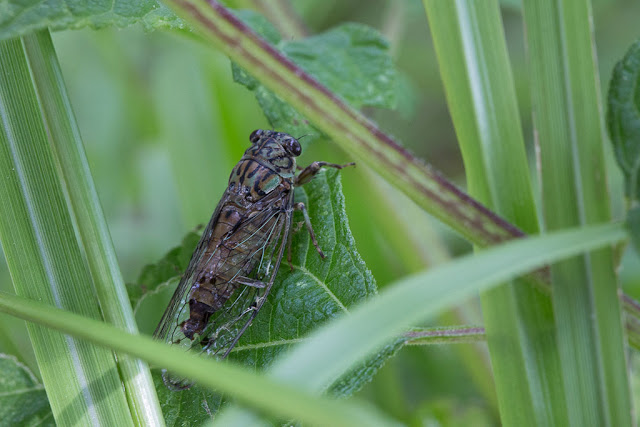 This is a cicada. They're buzzing in the trees at this time of year. They're usually pretty hard to see, but this one was caught in a doorway at Mom's apartment building. We walked through the door, and when it closed behind us we heard a loud, unmistakable buzz.

But I knew it wasn't just the door. So I opened it again, and the cicada rolled out from under it -- I think it had been trapped between the bottom of the door and the floor. It seemed unharmed, fortunately, and I moved it out to a plant in the surrounding woods. Adult cicadas don't live very long, but hopefully this one at least got to mate and continue its species!
Posted by Steve Reed at 10:39 AM