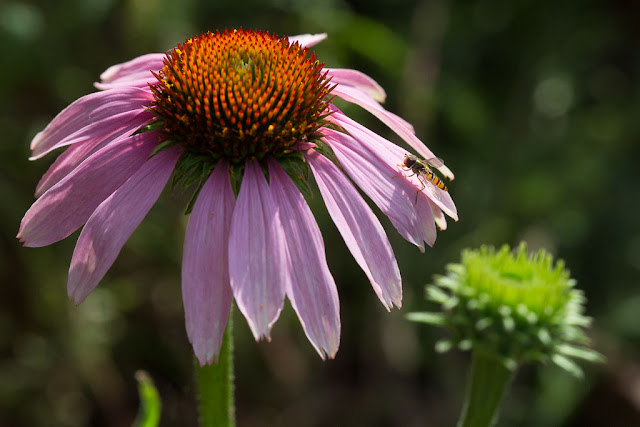 Echinaceas were some of the first plants Dave bought after we moved to this flat in 2014. We got three of them, I think, and we put them in a flower bed. Two were rapidly and completely devoured by slugs. We transplanted the third straggler to a pot, where we could better protect it, and it grew modestly -- until this year, when it suddenly came into its own, bushing out and growing several feet high. That's it above, with its very first flower, basking in the sunshine on our side patio. Several other blooms are on the way, too. Sometimes success takes a while!

You can see our friend the hoverfly on one of the petals. Well, maybe not the same one, but you never know.

Speaking of insects, this morning I woke up, came out to the living room and heard the unmistakable whine of a mosquito! Sure enough, there was one on the wall over my head. I never see mosquitos in England, so this was a surprise. It's as if Florida is coming to meet me!

I'm due to take off at 11 a.m. I'm half-packed -- everything is all together in a pile, and now I just have to actually put it in the bag, and then I'll be out of here. It won't be too hard. I'm a pretty light traveler.

Oh, and by the way, my stitches came out with no complications yesterday. And we did hear some firecrackers around the neighborhood last night. The rebellious colonists were restless, even here in the motherland! I didn't see any bright bursts, but there was a lot of popping and banging. Olga isn't too fazed by those sorts of sounds -- being a British dog, she's inured to the similar excitement of Bonfire Night in November -- but she was curious. She went out to the back garden and sat on the grass, staring into the noisy darkness. You could almost see the question mark above her head.
Posted by Steve Reed at 5:26 AM