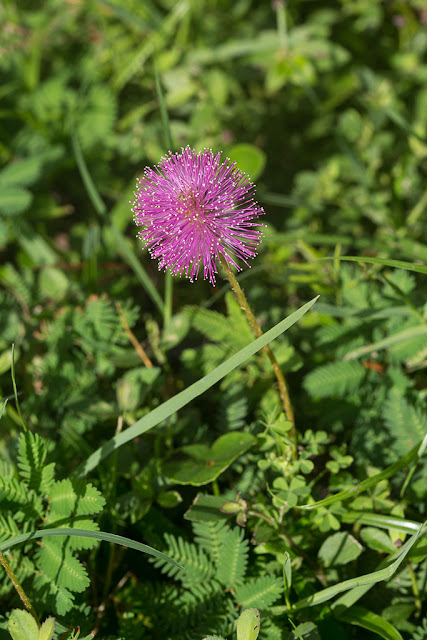 This plant, I learned yesterday, is called powderpuff or sunshine mimosa (Mimosa strigillosa). It grows in the grass below Mom's apartment building, and apparently it's a Florida native, though I'm not sure I've ever seen it before.

We spotted it yesterday on our morning walk, and when I took the camera out afterwards to get a photo, my lenses were immediately socked in by condensation. The camera was cold from the air conditioning, and it is so humid outside! I had to walk around for about fifteen minutes and let the camera warm up a bit before I could use it. 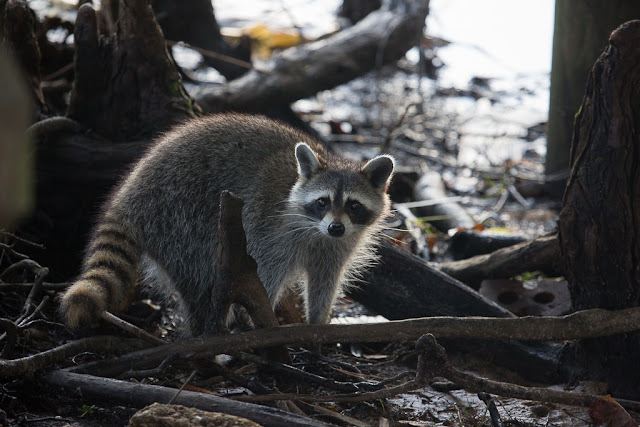 We also saw this critter the other morning. It was scrounging around under the dock, where Mom says people feed the local cats. There was even a cat nearby, just hanging out, apparently completely used to the raccoon.

Because of that thick humidity, and the accompanying heat, we spent all day inside yesterday. I worked on setting up Mom's new iPad, her birthday gift from me and my brother. We installed some apps and I got her logged in on Facebook and Flickr and helped her practice using it.

I think she'll really like it. Her old computer, as I have complained before, is ridiculously slow. Using it is a Zen experience -- it forces you to confront your ideas of what a computer should do, and how it should behave, and how quickly it should function, and then abandon all those ideas and face what's really happening instead. And what's really happening is: not much.

I migrated all her old photos to Flickr, so she can see them easily. Hopefully this iPad will ease her access to the Internet overall!
Posted by Steve Reed at 12:42 PM