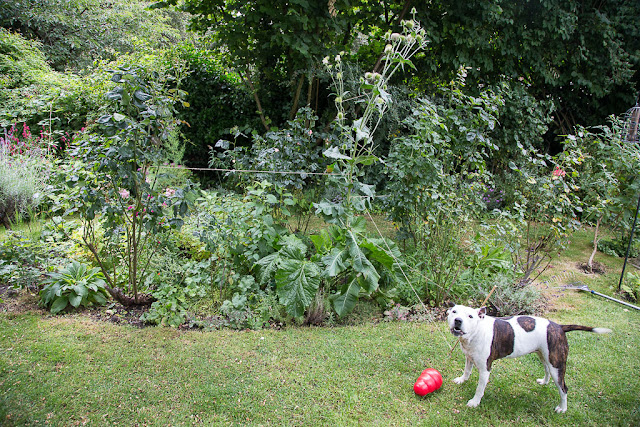 We've had some storms recently, and the winds knocked down our tall teasels. As I've mentioned before, these two plants are huge -- the tallest is about eight feet. So bracing them upright is no easy matter.

When they were shorter we could simply prop them up with a stake. But now, as you can see above, we've resorted to tying them to nearby plants with twine. So far, so good.

It's strange that they need this extra support because the teasels at Wormwood Scrubs grow upright all on their own. Maybe ours have too much nutritious compost or something.

Olga, by the way, was barking at me as I took this photo because she wanted to play with her new Kong Wobble toy, sent by the generous Linda Sue. The toy has a heavy bottom and is meant to be filled with treats, which the dog accesses through a hole in the side. It's a bit like a Weeble -- remember those?

Anyway, Linda Sue sent this thing months ago and I don't know why, but we never got around to giving it to Olga until yesterday. She is indeed enthusiastic about it (as she is about anything involving food or playing) and I'm sure she'll spend many hours trying to figure out how to get those treats out of there. (She hasn't quite figured out that she doesn't need me to help -- she can play with it on her own!) 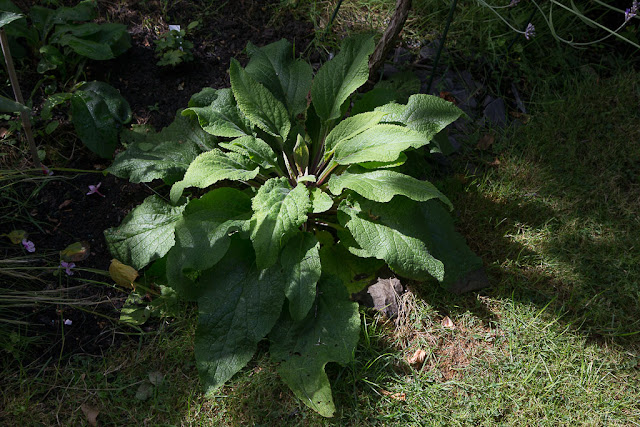 Also a couple of garden updates. Remember the rescued foxglove, which we were rooting on our windowsill for a while? It's gigantic now. It's evidently not going to bloom this summer -- I guess that comes next year. (I've read that foxgloves bloom in their second year.) 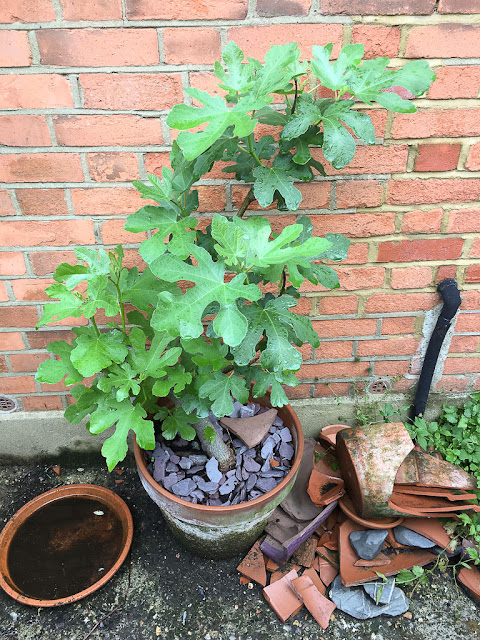 And here's the rescued fig tree, all leafed out and doing well on the side patio. I'm so happy with how well this plant has prospered!
Posted by Steve Reed at 6:18 AM