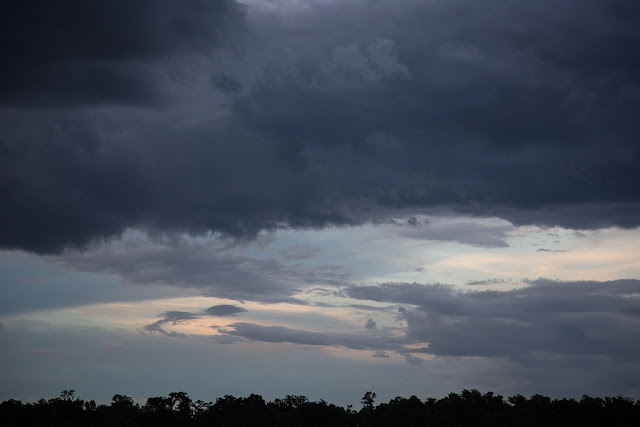 We're in that rainy time of year. Every afternoon the skies darken and open up, and we get a toad-strangling rainstorm followed by a temperature drop of ten or fifteen degrees. Yesterday we had a couple of them, and in the evening my mom and I went out on the dock to check out the dramatic clouds over the river. 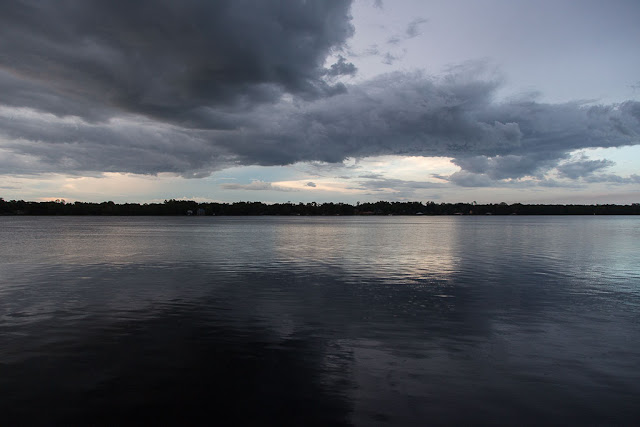 There wasn't much color in the sunset, but it was still impressive. It's hard to not be impressed by a Florida sky.

Yesterday morning I hung out with my nieces. We watched the animated movie "Trolls," and I thought I was going to have to suffer through a tedious, shallow, juvenile film, but no -- it was good! It was visually fascinating, with colorful, glittery characters and sets that looked as though they were made out of felt and colorful fabrics -- even though I'm sure they were all digital -- and it used a lot of great pop songs from the early '80s. And Christine Baranski, who I love, did some of the voice work. I'd watch it again.

Then we went to lunch with my stepsister and her husband, who drove up from Tampa. We went to a restaurant that calls itself a "fish camp" on the other side of this stretch of river, even though it is quite swanky and air-conditioned and nothing at all like a real fish camp. Fish tacos!

I got a text from Dave, back in England, saying that Olga "took a bite out of a fox"! Which scared me to death, but then he said neither were hurt, so maybe it wasn't a bite so much as a snarl. She chased the fox down the side of our house and the fox hopped the fence. Dave said he was in the kitchen and the commotion scared him. I'm glad I missed that!

Oh, one of you asked which river I photographed from the air on my approach to Jacksonville the other day. It's the St. Mary's River, which forms the border between Florida and Georgia. Took me a while to figure that out.
Posted by Steve Reed at 11:19 AM