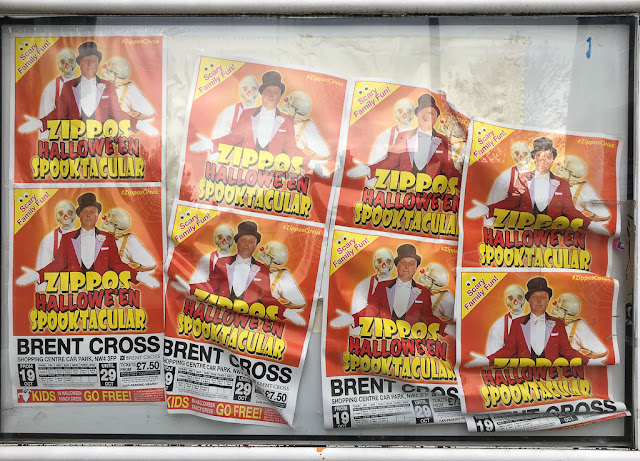 Another day, another outing with the dog. This time I did muster the energy to go to Hampstead Heath, and Olga -- of course -- was practically exploding with energy. So we had fun.

(I don't know what's up with my health lately. I've been feeling very dragged-out and have a dry cough and some chest tightness. It's persisted at least since my cold from several weeks ago. I don't have a fever so I've been on the fence about whether to see the doctor -- I made an appointment and then cancelled it, and then made another. I might keep this one. I suppose chest ailments deserve attention, though I think it may just be congestion from the dry heat in our flat. I used to get that when I lived in New York, too.)

Anyway, on Sandy Heath Olga and I encountered a mob of people with their dogs dressed up in Halloween costumes! We didn't hang around to watch -- and I didn't have my camera so I didn't try to take any pictures -- but I belatedly realized it was the annual Halloween walk sponsored by All Dogs Matter. That's the organization where we adopted Olga, almost five years ago! If I'd realized that right away, I probably would have joined in, or at least talked to someone there to show them how well Olga's getting on. 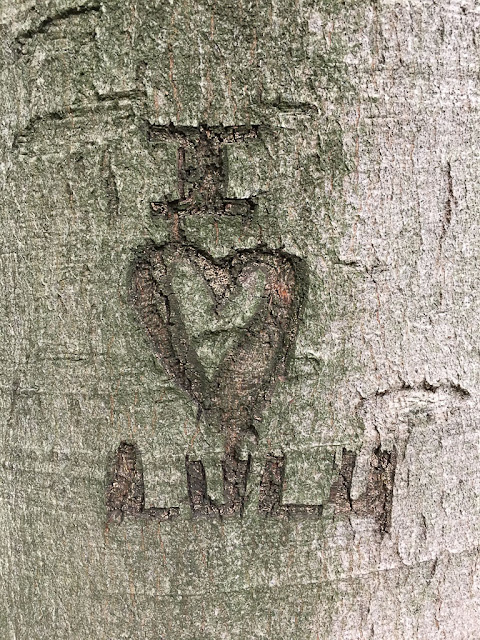 I've never understood people who carve names or messages into trees. I don't think it happens often these days, and this looks like a pretty old carving. Do you think it's a reference to Lulu of "To Sir, With Love" fame?

Back home again, Dave and I Skyped with our friend David in New York, which was great because we hadn't talked to him in almost a year. (Time flies!) He's been thinking about going to Italy, and Dave and I have been talking about the same thing, so we toyed with the idea of a coordinated trip sometime next year. It might never happen but it would be fun if we can pull it off.

We finished the day by watching "The Shining" and an episode from the new season of "Stranger Things" -- appropriately Halloween-ish!

(Top photo: Some collapsing advertising posters on a message board around the corner from our flat.)
Posted by Steve Reed at 6:32 AM