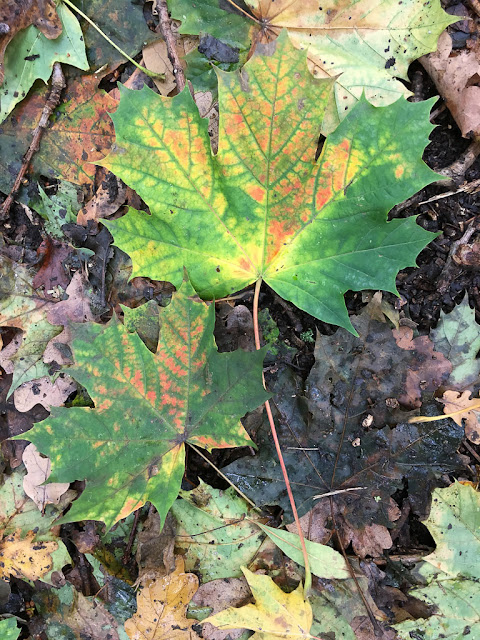 It's funny how every deciduous tree has its own method of turning color in the fall. Sometimes the leaves yellow from the outer edge. Sometimes they turn almost uniformly. And sometimes, as in this case, they change color in the center while maintaining patches and an outer fringe of green.

We're back in the trenches at work, after our weeklong break for a two-day vacation, a professional development day and two parent conference days. The kids were absent for all of that, but now they've returned, the little monsters angels. And I'm back at my desk, shelf-weeding suspended for the moment.

I've joined the health plan at work, something I never bothered to do when we moved here because I had the NHS to take care of me. But I've since realized that it can be faster to do certain medical procedures privately, so I now have insurance too. (Yes, it's emblematic of our unjust world that I am doubly insured when lots of people can't even get coverage. It's outrageous, honestly.) At least it saves the NHS some money if I pay for things myself via insurance.

A fringe benefit of our insurance plan is that we get "free" movie tickets every month or quarter or something. (I say "free," in quotes, because obviously we're paying for 'em somehow.) So maybe Dave and I will be going back to the theater now and then. I can't remember the last movie we saw at a cinema. It may have been "Rogue One" last December.

I read an interesting New Yorker article about sleep. Did you know that historically, humans didn't expect to sleep straight through the night, the way we do now? They saw sleep as periods of slumber broken by intermittent wakefulness -- "dead sleep" and then "morning sleep," with a bit of time in between. I thought that was pretty interesting. We're so concerned with getting a "good night's sleep," but apparently that doesn't need to mean unbroken sleep all night. I find that I often wake around 2:30 or so, enough to become aware and occasionally to get up for a drink of water or a quick walk through the flat -- to check things out and take random pictures of the houseplants -- and then I go back to sleep. I guess that's a fairly natural sleep rhythm.

(I'm joking about the houseplants. I only did that once!)
Posted by Steve Reed at 6:55 AM