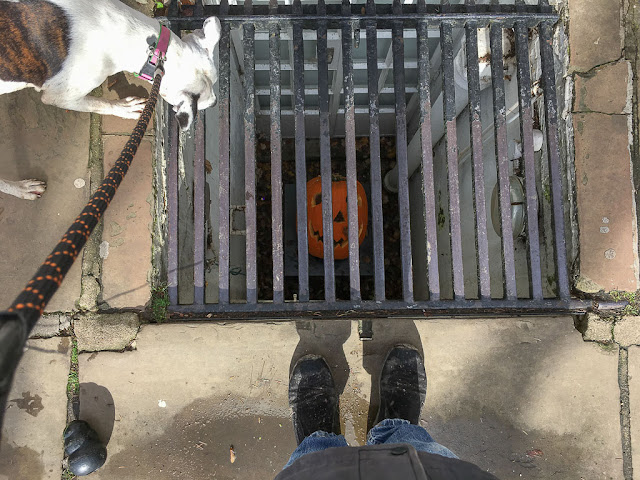 I was just telling someone the other day that I hadn't seen many Halloween decorations yet this year -- and then  suddenly, when I walked Olga to the Heath yesterday, I came across lots of them.

The jack-o-lantern above was especially crazy. It may be hard to tell from the photo, but it's located in a sort of light well that leads down to a basement window. It's sitting down there, peering up at passersby on the pavement. I hope they light it at night! 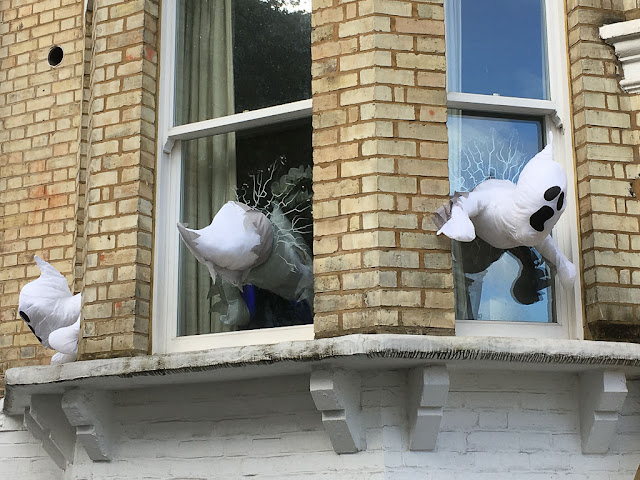 And then there was this house, which had evidently been assailed by numerous destructive ghosts.

As I've said in past years, Halloween isn't as big in the UK as it is in the United States, but I have seen a handful of shops with Halloween signs in the windows. Then again, we live in an area of London with lots of North Americans, so we may see more of this kind of thing.

So, yes, despite the threat of storm Brian, I did get Olga to the Heath yesterday. The weather actually wasn't bad at all -- cool and very windy but intermittently sunny and blue-skied. I enjoyed it! (Apparently Brian wasn't as bad overall as initially feared.)

I got plenty of reading done, too. I've been reading an excellent book, "Want Not" by Jonathan Miles, and although I've enjoyed it I feel like I've been carrying it around too long and I really want to be done with it. I bought David Yaffe's new biography of Joni Mitchell and I'm eager to start that, but I also have to read a novel for an upcoming book event at work, and I suppose I have to get that out of the way first.

Last night Dave and I invited one of his coworkers, as well as that coworker's wife, over for dinner. It was fun, and they told us about renting their apartment from a musician who has become somewhat famous for recreationally injecting himself with snake venom (!). They say he's actually a great landlord! Dave made parsnip and apple soup, a shredded crab and watercress salad, mushroom and artichoke risotto, and apple crumble for dessert. I just now finished loading the dishwasher with the third and final load of dishes -- I did the second load at 2:30 a.m. or so -- and I finished handwashing all the stemware. I could use a snake venom booster myself! Whew!
Posted by Steve Reed at 7:57 AM