Another Tabebuia, and Tigers in Space 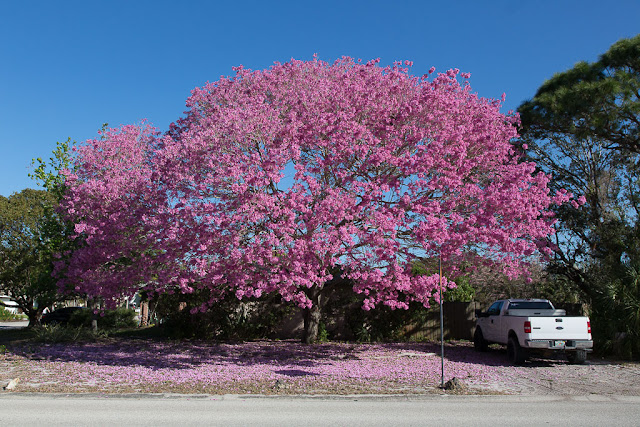 My friend Sue and I went garage-sale shopping yesterday morning, driving around the trailer parks and tidy neighborhoods of Anna Maria, Cortez and Palma Sola. It was a beautiful morning, and I got a few little items -- an old book and a colorfully striped handmade ceramic dish signed "Tami, 1958, Camp Deerhead." Obviously someone's summer art project, and ideal for holding nuts or olives when we have people over for drinks or dinner. Who could resist?

(Camp Deerhead, according to my Internet research, was in Hancock, N.Y. And it's long gone.)

Even better than my sale finds, though, was this huge pink tree. Turns out it's another type of tabebuia, like the yellow one I blogged last Monday. Isn't it amazing? 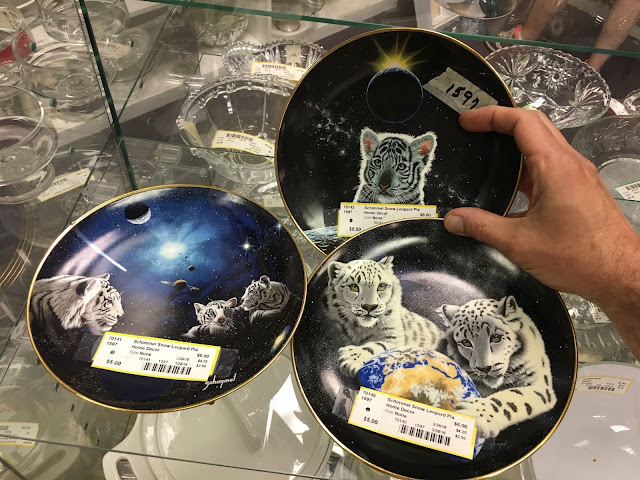 Here was another amazing find -- a collection of plates in a consignment shop in Bradenton. Yes, those are leopards and tigers -- in outer space!

Even though they are spectacularly perplexing and tacky, I did not buy them. They're too tacky even for me. I know Dave will be disappointed.

I stayed with John and Sue through lunch -- we sat on the Rod N' Reel Pier and watched the schools of mullet flash beneath the green waves. A guy next to us caught a sheepshead, and I'm sure he'll eat it, but I still felt terrible for it and I would have flipped it back into the water if I could figure out how to do it unnoticed! (And without causing an international incident.)

Then I got on the road back to Tampa, and began my journey home. The traffic was terrible. It took me more than two hours to get from Anna Maria to my stepsister's house, just in time to hurriedly shave and change clothes and then get back on the road to the airport. I was there in plenty of time for my flight, but I'm a believer in early airport arrival and even three hours ahead of time, I was a little stressed. Absurd, I know.

I got a massage in the terminal and then sat watching the sunset. The flight went well and I watched two movies, "Battle of the Sexes" and "Goodbye Christopher Robin," and I enjoyed them both. And then, on the London end, getting from Gatwick into the city was hell because the express train isn't running -- track work. It took almost three hours and a combination of bus, rail and tube to get home.

Back to work tomorrow, hopefully not too jet-lagged!
Posted by Steve Reed at 12:24 PM

I hope you take a day to sleep!

You and I are so much alike that it makes me laugh. In some ways, at least. I, too, stress about airport arrivals no matter how early I am. And if I could change that about myself, I certainly would.
I agree with you on the tigers in space dishes. They've crossed that imaginary line.
Yesterday I was driving the boys to the park where their baseball games were to be held and we passed a huge tree filled with white blooms. I am embarrassed to admit that I don't know what it was but Owen saw it and was amazed. "Mer! You should stop and pick branches of it!"
We agreed it was a pure glory.
Sure am glad you're home and safe. You really do need about a week now to rest up.

three hours is a little extreme. I stress out about traveling but it mostly centers around having made the wrong reservation. that pink tree is amazing!

That's a whole lot of traveling. I hope you have a very restful Sunday before work begins.

Rest seems to be the common theme in the commentariat. I concur.

I really love being in other countries, but the getting there has become so painful! The plants and trees in Florida really are amazing.

First of all, that pink tree is just spectacular! I can't believe you didn't buy those plates. They are so over the top, I would have been very tempted. The trip from Gatwick sounds awful. I can't imagine doing that without the express train. Your comment about getting to the airport early made me chuckle. I'm exactly the same way and my friend Julie is the opposite. On this last trip to Oregon, she offered to pick me up on her way to the airport but I declined. I made my own way. It just stresses me way too much to cut things as close as she does.

That is a whole lot of traveling to go back to work tomorrow. You are a hardy soul! I always had terrible jet lag flying to England and travel takes so much more time now.

I have really enjoyed all the Florida photos of sun, warmth and beautiful plants and trees. i cannot wait for spring here in New England.

I would have had to "rescue" the big cats in space plates as I love felines of all sizes.

Welcome home! You sure did a lot on your travels!

I'm in Palmetto for the winter, and found out early on that driving to and from Anna Maria Island during season can be horrible! But I love Cortez and can imagine how everything looked back in the '50's. I agree about the plates, though....even tackiness has its limits, right? Get some rest if you can.

A large percentage of garage sale goods are tacky including my garage sales.

That tree is beautiful. Reminds me of the colour of a crab apple tree in bloom but many times bigger. Hope your return to work is smooth and painless :)