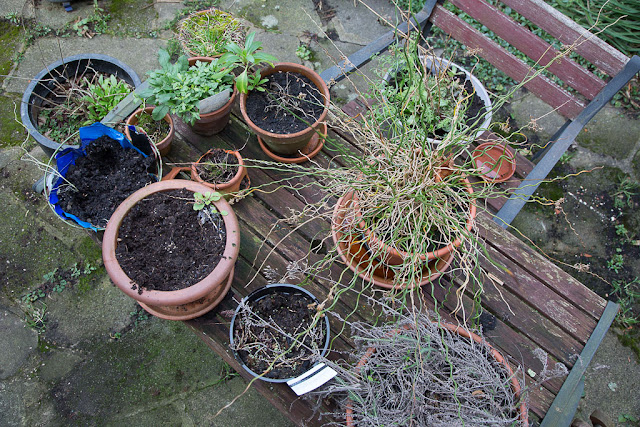 Here you have evidence of the sad condition of some of our patio plants. I mean, it's winter, so they're supposed to look bad, but some of these are genuinely dead and some seem to have mutated into something else entirely.

On the chair at the top is our lobelia, with some love-in-a-mist also growing in the pot. I'm sure it will come up again -- and hopefully this year we can keep the slugs off it! It's just a matter of time.

On the table, top left corner, is a sedum almost crowded out of its pot by some moss. Next to that is a mystery plant -- it's the pot that holds our crown imperial fritillaria, which barely came up last year and may well be dead. The pot has been colonized by something else that looks like a plant (rather than a weed) so we're going to see what it becomes. Same for the pot next to it, which has a volunteer something-or-other in it. I have no idea what's supposed to be in that pot, but whatever it was it's apparently dead.

We're going to throw out that huge corkscrew plant. Neither of us like it, and Dave bought it on a whim and we've had it a couple of years and it looks like hell.

Then there are a couple of tiny succulents that are dormant now, including one in a pot that I need to repair -- the squirrels managed to break it and my niece painted it, so I want to keep it. (Damn squirrels!)

The bottom right is yarrow, which will be fine. It just needs a trim and it will come up again. Left of that is a sedum that the squirrels have dug through, but I think it's still alive. Left of that, I have no earthly idea. And finally, left of that, a hanging basket with the remains of one trailing nasturtium -- that whole thing needs to be dumped.

On the ground at the upper end of the table is a pot containing another mystery plant as well as some pink valerian. It will be fine. I rescued that plant from one of the neighbors.

As I mentioned, we're having a chilly week here, so spring suddenly seems a long way off. Just a few days ago it seemed right around the corner! But there's frost on the cars this morning, and tomorrow's forecast calls for a low of 29º F.

Yesterday I was struck by a backache at work. It was very strange -- I don't usually have back problems, and although I was moving around some boxes of books, that seemed unlikely to be the cause. I was afraid I was coming down with the flu, but that hasn't happened, thank goodness. Hopefully it's just one of the transient aches and pains of a 51-year-old!
Posted by Steve Reed at 6:18 AM