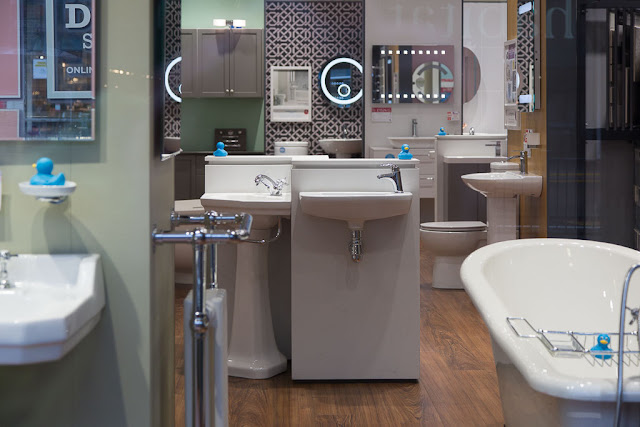 In our quest to address some long-neglected problems in our flat, I scheduled a handyman to visit yesterday morning to do some minor repairs on our kitchen and bathroom faucets. Sometimes the kitchen tap won't turn on all the way -- something about the handle, I think -- and the bathroom tap drips. I'm sure this is just a matter of changing a washer or something, but neither Dave nor I even know where a washer is located in a faucet, much less what it's supposed to do -- so a handyman was our best option.

Anyway, the guy showed up, and tried to turn off the water supply so he could do the work. Turns out, our stopcock (the valve that controls water into the flat) is stuck. He couldn't budge it, and didn't want to push too hard for fear of breaking it. We even walked up and down in the street outside trying to find the main valve into the house, and although we found the valves for both of our neighbors, we couldn't find our own. (Now I know how to turn off Mrs. Kravitz's water, though!)

After we'd spent half an hour wandering around in the street like zombies I called everything off. I had to get to work. So I paid him for his time (because, after all, it wasn't his fault that our stopcock is stuck) and that was that. The faucet still drips. The kitchen tap is still wonky. And I guess we need to alert the landlords about the stopcock, because if a pipe breaks someday (God forbid) there is no way to turn off the water into this flat! 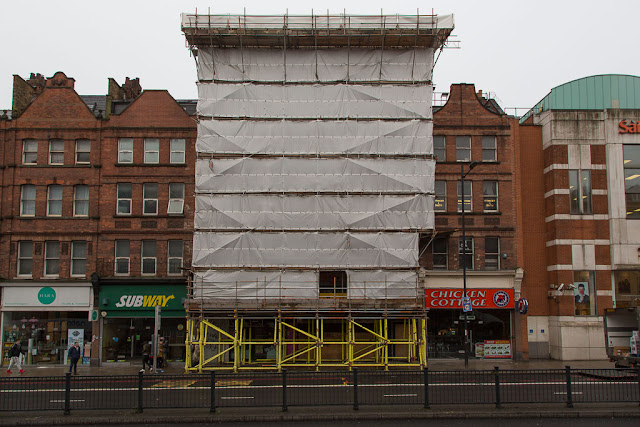 You probably don't remember (and why would you?) but a big fire flared up in our neighborhood a couple of years ago on Finchley Road. I photographed the scene at the time, and this (above) is what it looks like today. I don't know if there's any work going on behind that scaffold or not. The shopfronts are still closed tight. Here we are, almost two and a half years later!

But at least this building has remained standing. We had some neighborhood excitement on Monday when a house under renovation, not too far from ours, collapsed completely! Now there's just a big dark gap in the street like a missing tooth. Olga and I walk that way frequently -- I may take her over there this morning to check it out. The collapsed house sounds like it was in bad shape -- it hadn't been lived in for a decade -- but it was on sale a few years ago for £1.4 million. Can you imagine investing that much in a property only to have it fall down? Another reason why we rent, in this land of century-old houses!

(Top photo: A bathroom fixtures shop on Finchley Road.)
Posted by Steve Reed at 7:20 AM