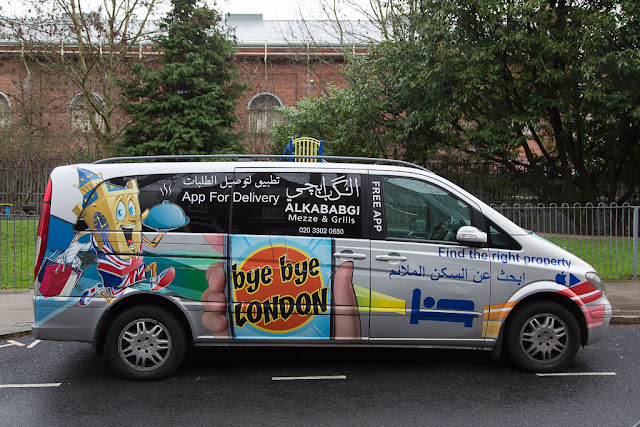 This van has long mystified me. It's parked in a road not far from our house, and seems to be for a restaurant, based on the "mezze and grills" -- by why are we saying "bye bye" to London? And why is Big Ben running with shopping bags? (Delivering food, one assumes...?)

And above all, why can we also "find the right property" and apparently take a nap?

It's all very mysterious. But it is eye-catching. 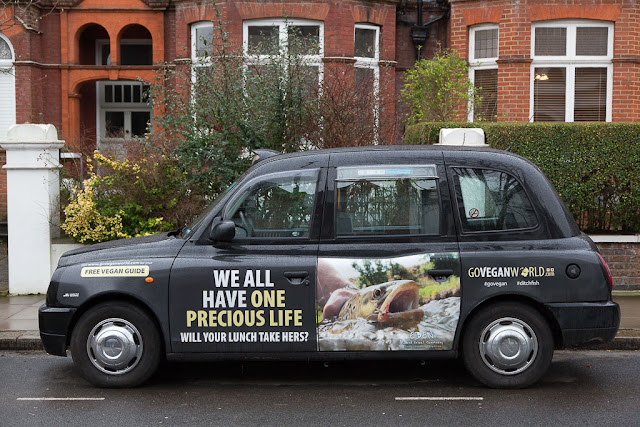 And then, not far away, this parked taxi was advocating on behalf of a sanctuary for farmed animals. I am all for it -- goodness knows farmed catfish (or salmon, or whatever that is) don't get much respect as individuals.

Speaking of which, Dave's little experiment with being vegan has slid off the rails a bit. Yesterday morning he texted me: "I'm eating a f---ing hot dog! Tastes so good!" And last night he made chicken breasts for dinner. You may remember he was trying veganism as a way to soothe his Crohn's symptoms, but I think he found that it hasn't made much difference. I told him, let's be vegetarian most of the time, but allow ourselves a little meat now and then. (Sorry, farmed salmon. We're killing fewer of you, at least.)

It's all about balance, right?

We're having what could be the coldest week of the winter so far. With temperatures projected to dip into the 20s (Fahrenheit, obviously) tomorrow, I put the fig tree back in the shed. It's been out on the patio for the past few weeks with no ill effects, but I think that's a little too cold to risk it.
Posted by Steve Reed at 6:39 AM