A Feather and a Rainy Walk 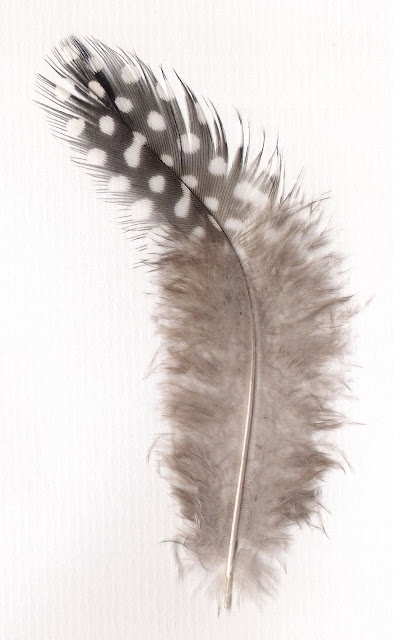 I found this feather while walking to the grocery store last week. What kind of bird do you suppose it came from? I can't think of anything with spots like that, at least not in the wild. Maybe a turkey or pheasant but I don't think we have many of those wandering around West Hampstead!

My grandfather would say it was an auk. Whenever he was uncertain about the identity of a bird, or annoyed with a bird for doing a lot of loud squawking early in the morning or pooping on his car, he'd grumble and call it an auk.


Speaking of wildlife, I set up the garden cam again the other day. From half an hour of motion-activated video I got 19 seconds of footage of a beautiful fox -- out in the daytime, at almost noon! I'm surprised a fox would be slinking around our garden at that hour, especially since Olga is likely to be out. We'll check the camera again in about a week and see what else turns up.

So how's life in the age of coronavirus treating you? We're doing OK here. Dave had to go in to the hospital yesterday for a routine infusion of his Crohn's medication. I wasn't happy about that, fearing he'd be exposed to something, which could be catastrophic with his reduced immunity -- but he called his doctors and they told him to come in as usual. (I've asked whether he should suspend his medicines altogether and allow his immune system to strengthen, but the doctors tell him no, because that could re-activate the Crohn's -- and then he could wind up with coronavirus and a Crohn's flare.)

Anyway, he reported that he saw very few people at the hospital, so that's good. And I'm sure they're sanitizing the heck out of the place. So fingers crossed he should be fine.

Meanwhile, I went grocery shopping again. I got frustrated because I asked Dave for a grocery list, and he gave me one, but when I went to the store to collect everything I found I couldn't carry it all! I somehow schlepped almost everything home and now we should be good for three days or so.

We're still not wearing masks. The World Health Organization still asserts they're not really useful or necessary for the general public -- but now there are contradictory reports that they may do some good after all. So who knows. I just haven't quite crossed that bridge. I'm washing my hands like crazy, though. They look like appendages on a scaly red reptile. 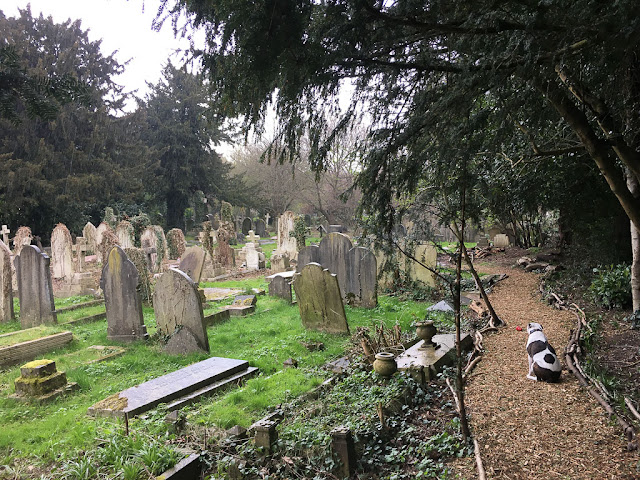 Of course Olga and I took a walk yesterday afternoon. Being an island nation, the UK's weather is extremely variable, and although we started walking in sunshine, we got caught 15 minutes later in a downpour. You can see Olga waiting it out above. She went into obstinate mode and refused to move from that spot under the trees until it stopped.
Posted by Steve Reed at 7:17 AM