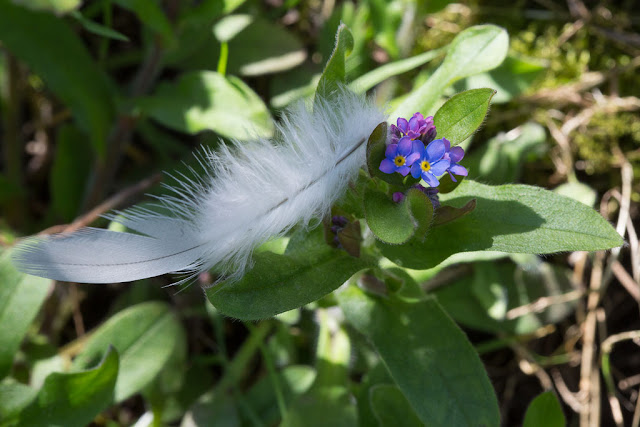 I was photographing the forget-me-nots, which are coming out now in the garden, when I found this white feather clinging to one of them. Probably from a pigeon, but pretty nonetheless.

After I wrote yesterday about walking on the Heath, I saw that there was quite a backlash to people being out in public over the weekend. Apparently some of the beachfront towns were quite crowded, and lots of people turned up on some parts of the Heath -- so many that the city has warned it will be closed if people cannot maintain distance. (For the record, I was on the West Heath, Sandy Heath and Hampstead Heath Extension, which must not have been as crowded as the main Heath, because I felt able to keep to the six-foot rule.)

Kew Gardens, which had initially said it would remain open for people who needed fresh air, has now closed for the foreseeable future. And Boris has said the UK may enact a tighter lockdown if needed.

Yesterday, Olga and I went to the cemetery and to Fortune Green. Again, we were mostly able to steer clear of people, although at one point a boy and a young woman approached me to pet the dog -- I didn't say anything but they were well within my safety zone. And there were kids on the playground equipment! A lot of people are either entirely ignorant of the rules or they're just not policing themselves.

I finally finished that infernal book about Margaret, Duchess of Argyll. Although considered a great beauty -- and steeped in scandal throughout her public life, including being caught up in the Profumo Affair -- she seemed thoroughly shallow and boring. The book itself felt hastily written and had no flair. Thumbs down! 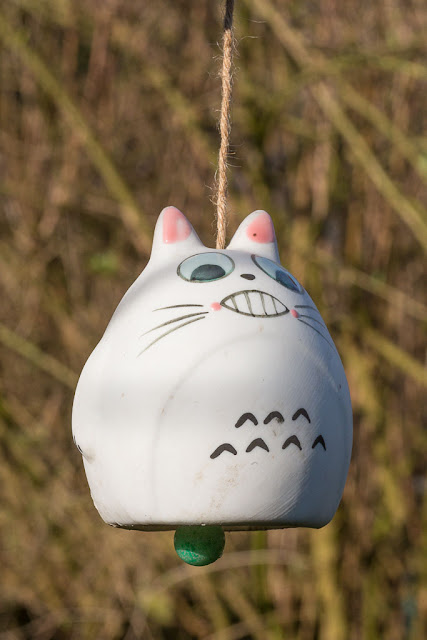 I'm not sure I mentioned this at the time, but Totoro -- our Japanese forest spirit -- got gnawed down from his tree sometime last fall. (I say gnawed because I'm virtually certain squirrels were the culprits.) He was unharmed but the little bead that served as his bell-ringer was missing.

It never did turn up. A couple of weeks ago I found a green glass (I think?) bead lying on the ground in the cemetery, and I thought it would be a perfect replacement -- and it is. Although nominally a bell, Totoro never really rings, so it's just for appearance's sake. I've now rehung Totoro in the garden so he can keep watch over things.


Remember the turaco? After it disappeared last fall, I assumed we'd never see or hear it again. Being a tropical bird, it is way out of its home range of East Africa, flying around here in England. Imagine my surprise when Olga and I went to the cemetery yesterday and heard it! It's back!

I made the video above so you could hear it too. The bird doesn't really repeat its call so quickly -- I edited out the 10- or 12-second pauses between each one. Very "Tarzan" sounding, isn't it? (Here's a video of one in captivity making the same call.)

I wonder if it ever left? Did it hunker down and quietly overwinter here in London, or has it been sunning itself in the treetops of Tanzania before migrating back? Maybe it's not lost at all -- maybe it actually belongs to someone who lives nearby and they allow it to fly free. So many questions I would ask that turaco, if I could.
Posted by Steve Reed at 6:55 AM