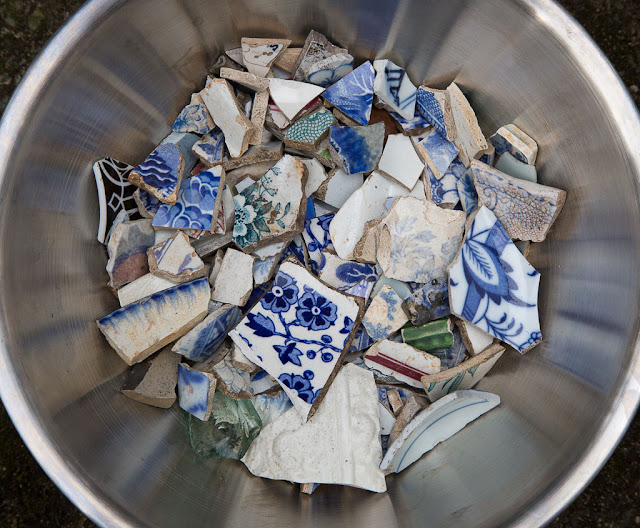 Yesterday I got to work on using some of the pottery chips I've collected on my walks with Olga. My idea was to incorporate them into stepping stones for the garden.

Of course this turned out to be a more complicated project than one would expect. I read online that I needed a bag of quick-setting concrete, which I located at Homebase and lugged home a couple of days ago. I wasn't sure I got the right kind, but it was the only quick-setting variety of prepared concrete they had.

Turns out it was a bit too rocky to be ideal. But we made it work. I roped Dave into helping me mix it, because he's done some building a repair work with his dad and I'd never touched wet concrete in my life.

We used an old frying pan lined with aluminum foil as a mold. Dave poured in the concrete and I frantically plugged the chips of pottery into the top, trying to space them evenly and get as many in as possible before the concrete set. 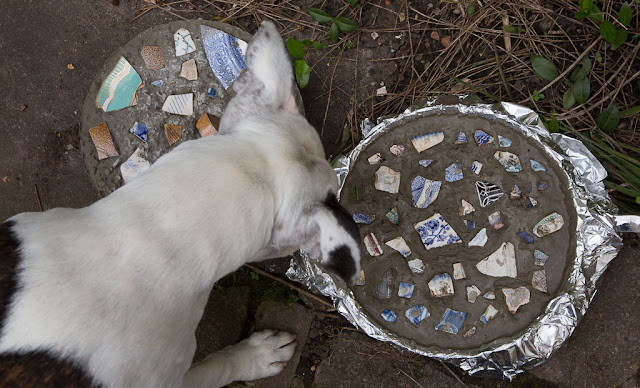 "Is there food in those bowls?" 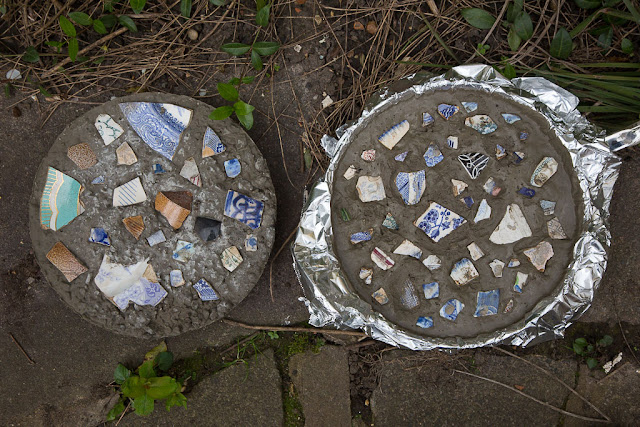 Here are the finished products. I think they'll get much lighter after they fully dry. They're not quite what I had in mind, but considering I've never done anything like this before I suppose they're OK. If I had it to do over again I'd buy smoother concrete (more sand, less gravel) and I'd get a variety that doesn't set quite as quickly.

I'm not sure how well they're going to wear, but it's all a big experiment anyway. I only used a tiny fraction of all the chips I have. I suppose if these don't work out I can toss them and try again.

Mrs. Kravitz went back to Homebase yesterday morning and came home with another carload of free plants! Her patio is literally covered with them. She gave me one of her sadder-looking primroses, which I have attempted to revive. I walked Olga to Homebase and picked up two more plants myself -- a crown imperial fritillaria and a pink spider azalea (which is labeled as a houseplant, so maybe it needs to be grown indoors). I'm not sure why there are still plants to give away at this point. Surely the store is just about empty?

Dave and I finally watched "Marriage Story" on Netflix last night. It's been sitting in our queue for weeks and weeks. I really enjoyed it -- and the acting was excellent, as confirmed by the Academy Award nominations it received. (And Laura Dern's win.)
Posted by Steve Reed at 8:08 AM